From Fandom with Love: Doctor No

An ode to beginnings. Even super spies have to begin somewhere, Dr. No marks the official start of the James Bond franchise as we know it, while there were adaptions of Casino Royale before the release of this film, this is considered the start of the official EON era of Bond films.

Doctor No sees Sean Connery step into the shoes of agent 007 for the first time, a role he would play 5 more times, but we’ll get to that in due time. He travels to Jamaica to do battle with the nefarious Dr. No and also learn a little bit about SPECTRE, an organization that would haunt him for years to come. That all comes later though, Let’s break it down! 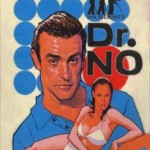 Dr. No for the most part plays out like a murder-mystery, which is something I’ve never really picked up on during my various viewings of the film (don’t ask me how!). The bulk of the film is carried by Bond in his search to find out what happened with an agent stationed in Jamaica named John Strangways. We know that he is gunned down during the early portion of the movie, but Bond has to investigate the island to put the pieces together. While Bond is doing this, there are parties at work trying to stop him at every turn, but luckily for our hero he is able to make a handful of allies who assist him including Felix Leiter, Quarry and Honey Ryder.

Bond eventually ends up on Crab Key island where he crosses path with the film’s main villain, and titular character, Dr. No. Dr. No reveals that he has a much grander scheme in mind, and it is up to Bond to thwart him during the film’s climax! 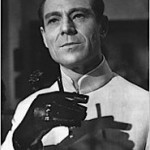 Dr. No is nice enough to lay out his plans for Bond and the audience during a dinner conversation with our hero. I will be honest and say, I was only half paying attention to his grand-scheme. Dr. No is an interesting villain in the fact that he is a lot more grounded than a lot of villains who come behind him. The problem though is he is introduced so late into the movie that most of his scenes are just expository for Bond. I’m not sure if it makes him look stupid or arrogant for laying it all out there!

Anyhow, it seems like his plan is to use his atomic-powered radio beam to disrupt a Space Shuttle launch from nearby Cape Canaveral. This would… I’m not entirely sure his motivation here truth be told. It seems like it’s a nice show of power, and he may get some money out of it, but it lacks the elaborate over-the-topness you expect from a true Bond villain.

I’m gonna have to give this plan an Agent. It isn’t big, it isn’t bold and it was pretty easily thwarted by Bond. He just had to turn a dial a lot… WOW! 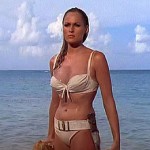 While Honey Ryder is typically considered the first Bond girl, there are several other girls in which Bond crosses paths with and eventually beds in this movie.

Sylvia Trench– Has the distinct honor of being one of the few girls Bond actually “dates” in these movies as she returns in From Russia from Love as well. Sadly her role in this movie and the next are superficial at best. She loses to Bond in a game of cards, and decides to have sex with him before he leaves for Jamaica. Yes, that’s pretty much it, he hardly even has to woo her! LIVE

Miss Taro– She is an interesting one since she never truly on Bond’s side, but just using her feminine prowess to lure him into several traps. Of course like most of the movie, Bond is a step or two ahead of her. She is taken into custody during the movie. LIVE

Honey Ryder– The first Bond girl is a sight indeed. She has a charming personality and a nice screen presence, but she doesn’t actually spend a lot of time in the movie. She is also easily wooed by Bond, but that will become a thing throughout these films anyhow. She is last seen making out with Bond in the back of a boat. LIVE

Bond’s introduction in this film is one of the coolest parts of the movie. The film actually does a pretty good job of building intrigue about all of its characters through shady shots and shadows, and Bond gets an introduction that is worthy of that.

Why am I mentioning all of this here? Because we’re introduced to Bond, James Bond while he is playing a card game, which would become a staple of the series. We also get our first ever Bond, James Bond introductions.

The card game Bond is playing is Baccarat, which even as a Bond fan, I’ve never really cared to find out how it works. All I know is Bond is apparently really good at it, but let’s see what it’s all about.

Baccarat is a card game, played at casinos and by gamblers. It is believed to have been introduced into France from Italy during the reign of King Charles VIII (ruled 1483—98), and it is similar to Faro and Basset. There are three popular variants of the game: punto banco (or “North American baccarat”), baccarat chemin de fer, and baccarat banque (or “ deux tableaux“).Punto banco is strictly a game of chance, with no skill or strategy involved; each player’s moves are forced by the cards the player is dealt. In baccarat chemin de fer and baccarat banque, by contrast, both players can make choices, which allows skill to play a part. Despite this, the winning odds are in favour of the bank, with a house edge no lower than around 1 per cent.

Baccarat is a comparing card game played between two hands, the “player” and the “banker.” Each baccarat coup has three possible outcomes: “player” (player has the higher score), “banker,” and “tie.”

So it seems like it is a game based more on chance than skill. The version that Bond plays in this film is called Baccarat chemin-de-fer , which is just a slight variation on the normal game.

Since this is the first movie, it is a lot more serious in tone than the later movies would become. That means that this film doesn’t offer nearly as many one-liners, and it also extends to the action. For the most part, the action is a lot more grounded with fist-fights and shoot-outs being more common than elaborate chase scenes and dangerous stunts.

That said, there is one moment that really exemplifies Bond in this movie, and is one of his most classic scenes.

There’s so much awesome in that clip. From the fact that Bond knew someone would come for him so he sets up a decoy, to playing it cool even when the villain thought they had the upper hand.

The capper on the entire proceeding though is of course his line, “That’s a Smith-Wesson. And you’ve had your six.” Cold, calculating, license to kill.

A View To a Thrill

I know this wasn’t in the original introduction, but re-watching Dr. No and thinking about what’s coming down the pipe, I would feel REALLY bad if there wasn’t a segment dedicated to the music/opening of the Bond films. Sometimes, the best part of the film.

I don’t want to continue to harp on it, but Dr. No was the first film as I mentioned like 100 times already so it set a lot of standards, but they weren’t standards at the time.

The Bond theme is a classic, there’s really not much else to say in the regard. The middle theme is just kind of hanging out there. I guess it wants to go for a party atmosphere since you have folks dancing in the background, and Bond does eventually hit up a nightclub in Jamaica.

The final theme/segment is a cover of Three Blind Mice, which is an interesting track to use in a Bond movie, but it does play into the movie as it represents the henchmen who get the entire plot rolling.

The opening segment isn’t anything special, but it gets the job done. The musical selection has always left me confused, it doesn’t serve to get me amped up for what’s about to come, but I guess it is only fair since this isn’t really an action movie.

Dr. No gets points for starting off the entire thing, and it is a fun spy movie, which isn’t something you can say for a lot of the films in the franchise. Sean Connery just shines as James Bond, and it’s a great introduction to the character and the world.

From Fandom with Love will return.. with the movie we’re named after From Russia with Love.