I felt the first Bond series focused a bit too much on the cold assassin aspect of the character, the new series intro has a much better balance of all things that make Bond…Bond. In just over a dozen pages, we get several fun locations, chases, gadgets and banter. It felt like a Bond cold-open/opening sequence condensed down to its bare essentials and it all works.

The issue is light on plot. Bond is on assignment to assassinate a target, but hesitates when he realizes his target isn’t alone. Before Bond can react or change his plan, the target is taken out by a third party and then the chase begins down the slopes. Bond catches the other party is knocked out, and tries to pursue the lead while working on an official mission. The gist of the book, but it works to set up an on-going plot and a subplot that both are intriguing.

Through the eyes of a killer.

The art is stellar with some panels of Bond in Tokyo really shining with the usage of advertisement and colors to create a striking image. In addition, early on in the books some cool POV shots from Bond and his fancy tech.

Review 7 (Out of 7) – The book knows how to trim the fat and set-up an exciting first issue and makes me intrigued to see where the series is heading. 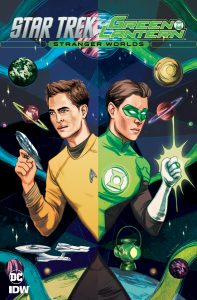 The Star Trek/Green Lantern series has been a hidden gem of comic book goodness for the past year and a half, and it continues with Stranger Worlds #3.

The Lanterns’ Power Rings are running dangerously low, and everyone is in a race to get theirs recharged, but things don’t go smoothly for many parties. Hal and the crew of the Enterprise are under assault by the Manhunters. John and Guy are on-board a vessel with Atrocious and an awakened Khan and his crew who are trying to understand the power of the Red Lantern Ring. And Sinestro is cutting a deal with Larfleeze in order to consolidate his power for his voyage to Oa.

With many threads weaved throughout the book, it feels like you are always being pushed forward with a new development or hint of dissent which means the book never feels like a drag. The drawback to that though is why there’s a lot of moving pieces, the overall picture doesn’t advance a ton by the end of the book while at the same time offering teases of what’s to come.

More of a personal problem, and not even a problem, but always throws me for a loop to see the actors’ likenesses in the book for the Star Trek characters especially once we get more of Khan in the book. Won’t spoil the moment, but it’s hard not to picture Doctor Strange at a moment in the middle of the book. At the same time, need to give the artist created for so easily capturing the likeness of all of these actors.

Review 6 (Out of 7) – A pretty solid middle chapter with plenty of intriguing developments and setting the stage for the big battle. 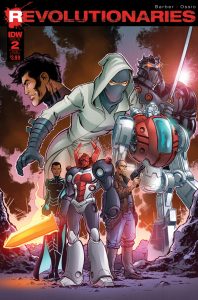 Revolutionaries is an exciting premise on paper, but the book has been bogged down by so much set-up and exposition.

Most of this issue is putting characters into place to further put them into place for the next leg of the book. The idea of a moonbase is exciting, but the steps that the Earth-based characters take there is just kind of a drag as we talk it out for several pages, and then just fly there.

I get that this is a crossover of on-going books, but it feels like so much work to have to actively be reading a lot of these series to gain some more backstory and character dynamic. I picked this up because I liked the idea, but the more I read the more feels like it was a mistake if wasn’t actively following several of the on-goings. That’s on me, not the book though.

On the positive side, the art really holds this book together. It is never an easy task to bring different characters together and make everything look uniformed, but it works so flawlessly in this book. It is also helped by a strong sense of scale and character near the end of the book. Some great shots.

Review 3 (Out of 7) – I don’t wanna carry around Wiki when reading what should be a fun for fans of any property crossover, but alas.