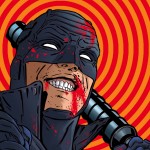 “Gay Batman,” I remember that being the running joke with Midnighter. And at first glance, I can totally see it. His costume (at least the head) looks like Batman without the ears. He’s also a street-level vigilante. Beyond that though, the comparison really falls apart. And Midnighter #1 does a great job of highlighting that, introducing the character to a new audience (myself included) and really setting the tone for the adventure to come.

Usually, I like to start my reviews by breaking down the story and action beats, but I really wanted to comment on the art in this book. Mostly for the fight scenes, which seem heavily inspired by the recent Warner Bros’ Mortal Kombat games. If you’re unfamiliar with that game (or this comic), instead of focusing entirely on the gore of an action, it instead focuses on the impact. So when Midnighter hits someone, it is overlaid with an X-ray that shows the damage being done from the inside.

By showing the impact, you do shy away from the gore, but oddly enough makes it a bit more graphic. You just never realized how hard superheroes hit until then. The technique may be used in other books, but here I felt it gave the action a more kinetic and refined feel because he was targeting specific parts of his foes. 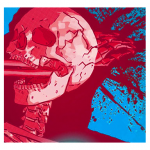 In addition to the cool use of X-Ray, the little cutaways/transition panels were always really well done. Handling “smaller” action, which gave a sense of momentum and movement without taking up too much real estate on the page.

Finally, I like his haircut. It looks different than most other comic characters especially DC heroes. The little things.

Now getting back to the whole “Gay Batman” comparison, the issue pretty much kind of knocks that off the rails from the first panel featuring the titular character. As we get a glimpse at Midnighter’s dating profile, which is pretty honest with what he wants, who he is and what he can and is willing to do (and it seems like everything is on the table) and then we see him on a date. A date in which he seems to be engaged with the person and not putting on an act or pretending that it’s something he dreads.

Midnighter’s dating life actually forms the backbone of the story. In both that it shows he actively dates (unlike a certain other vigilante), and it’s a clever means in which to introduce the character to a new audience. We are twice told about his powers, but never in a manner that is completely forced. Okay, the second-time a bit, but he does seem to revel in the ability to taunt his foes so I’ll give him that!

And his power, if you have never read a Midnighter comic, like myself, is that he seems to have a “Fight computer” in his head. This allows him to see and predict almost every possible move his opponents will make before they do. He also has access to a special transport “door’ from the “God Garden” which allows him to travel quickly around the globe.

But we also learn a bit of his history with a brief mention of Apollo, and his “usage” of his hook-ups as a sort of… network for him to go where the trouble is. The set-up to that is also great.

And I have to say, I think that was the most fascinating part of the book to me. For all of its grit and gore, Midnighter had a real sense of morbid humor to it. It didn’t take itself too seriously, and allowed the hero on multiple times to kind of sit back and take it all in. Heck, he even got laid in his first issue. Take that Batman!

If there was one thing that I didn’t necessarily care for in the first issue, and probably the most important, the dangling carrot didn’t really grab me. As noted before, Midnighter has special gear acquired from the “God Garden,” and at the start of the book, we see someone break in to borrow some of the goods. Okay, all of the goods. And it seems like Midnighter is tasked with clean-up and retrieval. It’s an element, I’m sure they will build on, but wasn’t as captivating to me as the rest of the book, and it’s kind of sad since it seems to be the big hook for the first major arc.

Review 6 (Out of 7) – Midnighter was a great first issue. A comic that has found a nice mixture of the violence we all crave, and that heart that makes us connect and like the characters we read. I’ll be back for issue 2!