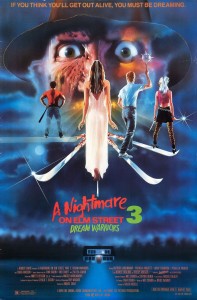 A Nightmare on Elm Street 3: Dream Warriors is proof that the producers at New Line Cinema learned their lesson after the woefully misguided Freddy’s Revenge and were determined to bringing the series back to its fundamentals. Arriving two years after its predecessor, the result of this dedication is an enduring masterpiece of practical effects that influenced the genre for decades.

The film opens with the central protagonist, Kristen (played by Patricia Arquette in her first role), being attacked by Freddy Krueger within her dream. Freddy uses his knife-glove to slash Kristen’s wrist, and she awakens to find that she is holding a razor blade and has the same wound that Freddy gave her. Kristen’s mother, assuming that the injury was a suicide attempt, seeks assistance from a therapist named Dr. Gordon who works with troubled teens in a psychiatric hospital called Weston Hills.

While studying Kristen’s condition, Dr. Gordon encounters Nancy Thompson, the heroine from the first Nightmare on Elm Street film. Nancy, now a young adult who is wise beyond her years as well as clearly worn by her encounters with Freddy, decides to mentor the troubled teens at Weston Hills, who are all being tormented in their dreams by the fedora-toting murderer. Nancy trains the young patients to harness their energy in order to become masters of their own dreams and fend off Freddy’s vicious attacks. 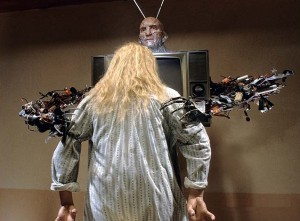 While Freddy methodically stalks his victims one-by-one, Nancy and Dr. Gordon investigate Freddy’s origins, which stem from a horrific incident that took place decades prior within the very same mental hospital. In the 1940’s, Freddy’s mother, Amanda Krueger, was accidentally locked in a wing of the hospital containing the most violent, criminally insane patients. Unable to escape for several days, Amanda was brutally assaulted by the inmates, becoming pregnant with Freddy, who is referred to as “the bastard son of a hundred maniacs.” Clearly, nurture had a head start on nature in turning Freddy into the demented psycho that he is.

From this point forward, the film jumps between Freddy’s battles with the Weston Hills teens and Nancy and Dr. Gordon’s mission to stop Freddy for good by finding his remains and cleansing them with holy water. Freddy’s encounters with the Weston Hills “Dream Warriors” are generally fun (I’m not sure why a couple of them choose to look like Final Fight characters, but the movie is better for it), but end too quickly, with Freddy often simply scoffing at his foes before easily killing them. The scenes involving Nancy and Dr. Gordon feel more misguided (did this movie really need a Ray Harryhausen-inspired stop-motion skeleton fight?), but at least the writers tried to provide a compelling back story for Freddy. 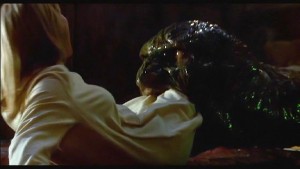 What really separates Dream Warriors from most “slasher flicks” is its theme of empowerment. While many of the patients of Weston Hills suffer tragic demises at the hands of their sadistic nemesis, they are eventually able to confront him with confidence, alleviating much of the frustration that tends to accompany the demise of a character in the horror genre. Even with the heightened degree of empowerment granted to its characters, there is still plenty of opportunity for gruesome visuals, and this film easily has the best and most creative effects in the entire series.

In terms of entertainment, this is hands-down the best Nightmare on Elm Street, and it has aged very gracefully over the years. While the acting and tone of the film can be quite cheesy at times (it’s hard not to laugh when the Dokken song kicks in as the credits begin to roll), it’s obvious that director Chuck Russell was enthusiastic about delivering the most creative horror set pieces possible. His efforts completely revitalized the series and established a reliable framework for future entries to follow.

Best Kill: Phillip – a sleepwalker whose arms and legs are slashed open by Freddy, who uses Phillip’s veins to control him like a marionette. The teen is guided to a tall window where he is thrown to his death.

Genuine Scares: Phillip’s death is the most shocking scene by far. Kristen nearly being devoured by a very phallic-looking Freddy-snake is somewhat disturbing as well.

Rating: 6 (out of 7): Dream Warriors is the most fun you’ll have with Freddy Krueger, bar none!