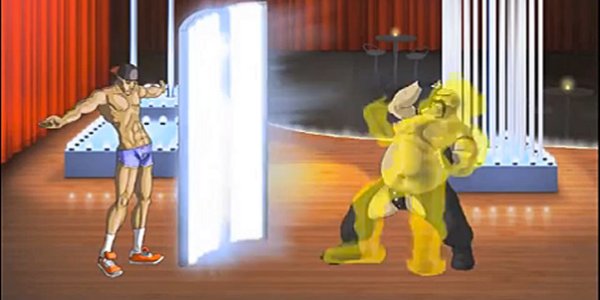 With the debut trailer of Ultimate Gay Fighter, do you think that the use of stereotypes and tropes under the guise of social commentary can be done in a positive light?

The short answer is no, and that has to do with the many fallacies attached to that argument. The problem with stereotypes or any form of generalization is that they’re often informed by very limited subjective experience or normed by the culture a group of people may operate in. While using these generalizations in an informal debate could be considered useful to some, I don’t honestly find that they bear any value in meaningful debate as they lack objectivity. That is, stereotypes — regardless of their implicit popularity — are not universally factual. The reasoning that widely held stereotypes can be considered to be at all “valid” is actually a logical fallacy. For example, a room full of people could believe that half of the number eight is really six. It isn’t, however, as we know based on objective knowledge that it is actually four. With that being said, stereotypes and generalizations do more to hurt our knowledge on any subject than actually inform. Sorry for not directly answering the question with that explanation, but I had to lay out the fundamental issue with these social tools before touching on why their use here is especially egregious.

Regarding whether stereotypes can “open the door to meaningful social commentary,” I’m not sold on that premise — mostly because it is usually an excuse used out of desperation. In the case of this new game, Ultimate Gay Fighter, the creators were called out for using narrow-minded generalizations about a marginalized group as the crux of the game’s notoriety. The use of these “homosexual tropes” has been received poorly not because the intent of the game is to promote gay people in a positive light or to “induce meaningful social commentary,” but rather to have the game’s audience point and laugh at the stereotyped way gay people are portrayed. How these fighters look, act, and talk are informed by negative characterizations of the homosexual and transsexual population. That’s why it is getting a lot of heat right now. Justifiably so if you ask me, as all of these aesthetic choices do nothing but perpetuate negative views and oppress an already oppressed section of the population.

Now that I’ve established that stereotypes in any form should be ignored and that the excuse of social commentary is weak, I’d like to discuss why I’m annoyed at their use of this excuse. You see, this video game company was called out on doing something that impacted a group negative and refused to take any responsibility. Instead, they shrugged off narrative division by claiming that they affected group “misunderstood” the intention of the game. Today, I’d like to explain why that’s a really terrible thing to say.

Whenever you say or do something that is taken negatively by any audience, the important thing to remember is that impact takes precedent over intent. That is, the way your messaging was received is more important than what your original intention might have been. For example, I might step on your foot and accidentally break your toe. Though I may not have intended to break your toe, the toe is still broken and it still hurts. In instances like this, a person was affected and minimizing the seriousness of how you affected them can actually have negative consequences. In as much as I understand that the natural reaction to criticism is to become defensive, the right thing to do is to take responsibility for what you’ve done and apologize, with the promise to do better in the future. To further that point, action has to be taken by you so that your apology isn’t ultimately considered hollow.

To conclude, no I don’t find the excuse of wanting to “open the door to meaningful social commentary” as being acceptable in anyway. Stereotypes — regardless of their implementation — are often hurtful and oppressive, and meaningful debate over social roles can only be achieved in a neutral setting where those in discussion can embrace different and often competing perspectives. This game should not be in development and its developers should rightfully be taking responsibility for their actions.