My role at Nerds On The Rocks has been to review things outside of the Big Two. That’s been my goal since I signed on in October and I thank Earl & company for recognizing my pep and letting me cultivate my own weird little space on the site. With that being my MO, I’m surprised it took me so long to get around to any Valiant books. Once a strong publisher in the 90s, they went defunct for a few years after their Acclaim buyout (comics is a cruel business, kids), but they’ve been back up for a while now with a number of titles. 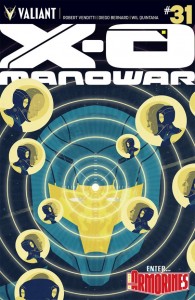 My minor OCD made me hesitant to blindly jump into a book 30 issues deep. However, one can be prepared for X-O Manowar with these 3 concepts in mind: fifth century Visigoth warrior, bad ass alien armor, fights in the present. All set? The issue opens with an unknown armored man infiltrating… somewhere. Jumping to Manhattan we find Phillip Zahn, CEO and tech genius, going over armored suit designs while sipping what looks like Johnny Walker Black Label out of a modified drinking hat, dubbed his “thinking cap.” In 3 pages Zahn is shown to be an adulterer, a shady defense contractor, and a barbarian for drinking perfectly good scotch out of a straw.

After a brief stop with our title character ringing in the new year (HAPPY NEW YEAR to you as well, faithful reader!), we return to our infiltrator, who has just planted a bomb. The mysterious location of these explosives and Zahn’s devious nature hidden by a veneer of class and charm maintain an air of tension until the very end.

Venditti’s dialogue does a great job of conveying the unique personalities of the characters. That effort helps to keep things grounded in a world of alien space armor. The team of Bernard and Rodrigues on pencils and ink respectively have a flair not only for the advanced technology seen throughout the issue, but also the action seen in the finale. Their bodies are alive and dynamic. And, the cherry on top, prolific colorist Wil Quintana utilizes light and shadow to make a textured world.

It’s said that every comic book is someone’s first. This issue is a great example of that mantra in mind. Multiple locales, mostly self-contained weaving plots within the issue, and even some humor. All this bang for your buck is what comics are all about.

Review 6 (out of 7) – Some suspense, a lot of fireworks, and a cliffhanger that will force you to get the next issue.