Comic Review: The Wicked + the Divine #20 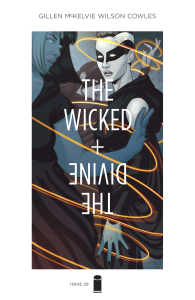 After WicDiv #18-19’s summer crossover style action with the sky gods battling the Underground gods, writer Kieron Gillen and artist Jamie McKelvie use WicDiv #20 for a much needed reflection and setup for the even greater battle to come. But this issue is far from boring. It is a real masterclass in how to use flashbacks to both build suspense and reveal the truth about character relationships. By the end of the issue, Inanna’s death is even more tragic and senseless, Baphomet is much more sympathetic, there’s a little bit of Laura still left in Persephone, and Ananke is still the worst ever. On a more technical storytelling level, the flashback sequences are a testament to Matthew Wilson’s ability to show a god’s power and personality through one burst of color from the moody Goth glaze of Baphomet’s abode to the pink, airy magic of Inanna’s abilities.

The plot of WicDiv #20 feels a bit like a retcon with Ananke, not Baphomet, being responsible for Inanna’s death, Baphomet’s name not actually being Baphomet, and Persephone never actually dying. But in Gillen’s hands, the new reveals don’t feel like a do-over or storytelling Band-aid. In fact, they deepen the character of Baphomet and make the upcoming battle against Ananke seem more desperate as she doesn’t really care if there is collateral damage on the way to sacrifice certain gods so the world continues to have Pantheons, inspiration, and art. 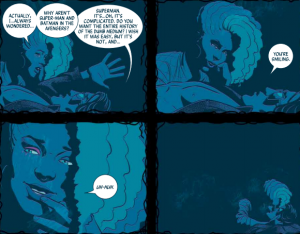 Baphomet is an insecure jackass, but he truly cares for Persephone and is there for her as she lies half comatose and motionless in the Underground for several months. He and Persephone share a real connection and bond over being fans of things, and a meta-joke about the denseness of superhero comics earns her first smile in a long time. (And in a clever joke that only Mesopotamian mythology nerds or Wikipedia searchers will get, we find out a big reason why Baphomet has had such a huge chip on his shoulder.) McKelvie nails the body language in their interaction as two lonely fans-turned-fugitives end up sharing an intimate moment together and find new purpose in taking out Ananke. This issue fills in Persephone’s story beast from the naive goddess in WicDiv #11 to the confident, tendril spouting badass in this arc.

Another relationship that Gillen and McKelvie focus on in WicDiv #20 is the one between Urdr (formerly Cassandra) and Persephone, who took different paths into godhood, with Urdr being a skeptical journalist and Persephone the ultimate fan. And Urdr hasn’t lost her skepticism, is hesitant to use her powers against Ananke, and wants to go the legal route and get Ananke arrested. Urdr doesn’t approve of Ananke’s actions, but doesn’t think these basically kids with superpowers can find any success against her. However, the final pages of this issue show that Persephone isn’t a scrappy fangirl any more and has real power and smarts as Gillen and McKelvie wisely leave Urdr’s role in the upcoming battle royale ambiguous. Her non-interventionist attitude is responsible in light of Pantheon members and innocent bystanders, like Persephone’s parents, dropping like flies, and it’s nice to hear from a clearer head after the high passions of the previous two issues. But Gillen and McKelvie still show that, like Laura’s enthusiasm still being present in Persephone, Cassandra’s temper is still present in Urdr, and this is on display when Persephone reveals the Underworld god’s plans. It’s like Cassandra’s reaction to Luci in the first arc of WicDiv, but with fancier makeup. 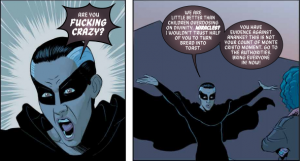 Matthew Wilson’s colors in WicDiv #20 is easily on par with some of his best work in WicDiv #14 (The Remix issue filled with flashback that acts like a companion to this one.) and WicDiv #8 (The Dionysus rave issue). He indulges in quite a few coloring styles in this comic from the stark black and white of Cassandra’s face and uses of power to the abstract expressionist shmear of Ananke’s violent actions that erupts into blinding atomic white. The death of the gods may seem like action movie explosions from McKelvie and Wilson, but are actually unique founts of inspiration coming in done and leaving the world in a multicolored cascade as stylish hairstyles and outfits become simple lines.

Kieron Gillen and Jamie McKelvie expertly use flashbacks in WicDiv #20 to shed new light on characters like Baphomet, Persephone, and Ananke. The comic also has some shocking reveals, is excellently colored by Matthew Wilson, and is a success on a visual, visceral, and intellectual level.