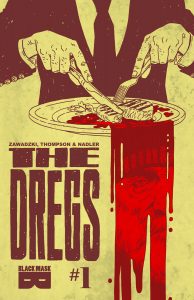 Black Mask’s tradition of heavy hitting, socially relevant genre bending comics continues with The Dregs #1, a homeless noir from writers Lonnie Nadler and Zac Thompson, artist Eric Zawadski, and colorist Dee Cunniffe. It features an amateur P.I. named Arnold, who loves the Philip Marlowe books by Raymond Chandler and just happens to be a homeless drug addict. He spends the comic walking around Vancouver and trying to find his missing friend Manny while his old home becomes gentrified in the process as part of a capitalist system that chooses profit over people’s welfare. Arnold is flawed, yet intelligent protagonist, who has an almost supernatural bond with the city of Vancouver that is shown by Zawadski inserting actual street names and using a map overlay as he traipses the city looking for his friend. But the comics isn’t just people who live on the street and has a sociopolitical conspiracy element that seems to pop up in a lot of Black Mask’s books.

Zawadski and Cunniffe hook readers on The Dregs #1 with a pair of almost silent opening sequences that are one part wistful, one part disgusting. The wistful part comes from the first page where they do the history of the city of Vancouver, and its rapid development in three panels. It’s like a gorgeous establishment shot in film and establishes the role of the city in The Dregs‘ plot as well as hinting at Arnold’s love affair with it. But then Zawadski plunges us into darkness, meat hooks, and human flesh culminating in a nauseating pair of nine panel grids where an able bodied human being is turned into some kind of gourmet sausage and served at one of Vancouver’s overpriced restaurants where people dine to be seen and not to truly enjoy the food. It’s like some rich people took Jonathan Swift’s satire A Modest Proposal (Which is quoted on the title page.) literally. 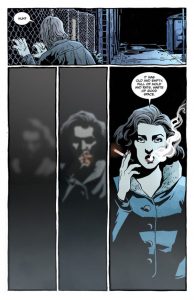 Arnold is a big fan of detective novels and uses his knowledge of them and Vancouver to help find his friend. Nadler and Thompson’s voiceover narrative doesn’t intrude into the plot or art of The Dregs #1, but adds color to Arnold’s character and also builds up his relationship to Vancouver. It’s kind of sad when he runs into an old bodega that he used to each lunch at that is probably going to be condos, but there is also some wry humor when he remarks that it was super easy to rob and thus went under. Nadler and Thompson let the plot unfold naturally like Arnold’s amble around The Dregs before they throw a wrench into the proceedings to get you to come back for issue 2.

Zawadski varies his art style occasionally going for the chiaroscuro lighting of film noir and then sometimes pulling back and giving The Dregs #1 more of a documentary feel with balanced colors from Dee Cunniffe like when Arnold passes random hipsters on his walk or during the zoning meeting that he crashes. But he can do stylized work like when Arnold bumps into a tall, beautiful chain smoking woman outside Manny’s old place. The cigarette smoke transports you back to a movie theater in the 1940s, and Arnold even gets a small clue to where Manny might be. He also gets to invoke his inner badass private eye and traipse off without giving the woman any contact info.

Lonnie Nadler and Zac Thompson an excellent job of humanizing its main character Arnold when homeless people are often marginalized and forgotten by society in The Dregs #1. Even though he dresses differently than him and is hooked on a drug named listo, he’s a true private eye in the Philip Marlowe tradition and even takes on the Chandler character’s name during the zoning meeting. Add Eric Zawadski’s neat panel grids and bursts of grotesquerie buried beneath the fancy buildings and food, and The Dregs is one of the more unique comics I’ve read in 2017.