The 2011 reboot of the DC Universe led to a brand new universe where anything was possible and the heroes became blank slates. In the six years since many a character has flourished, while some of the more popular characters have had a hard time finding a voice and direction. No character has had a harder time finding a creative direction than Green Arrow. He’s gone from being the butt of the Justice League’s jokes to the leader of magical iron fist clones, and even trying to shoehorn the Arrowverse into the book hasn’t worked. Green Arrow Rebirth however is a great soft reboot that seems to build on what came before while forging a path to the future. 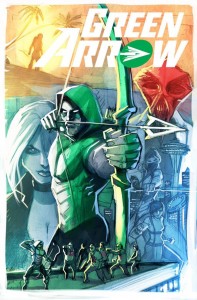 The story penned by Benjamin Percy the writer of the previous run is pretty straight forward. Black Canary and Green Arrow have their first meeting and stumble upon a human trafficking ring in the underbelly of seattle and they take the first steps in taking down the Organization. Taken on it’s own the story is pretty by the numbers and has been done before in numerous comics before it, but Percy’s expert handling of Oliver and Dinah’s personalities is what makes the issue work in part.

Percy gets Oliver Queen back to his hard traveling roots as the stereotypical young Liberal a character trait from before the new 52. This is where we see what separates Green Arrow from the other street level heroes who permeate the DC Universe. Previous writers played Queen like a frat boy who only wanted to be a hero for the celebrity it brought. Percy’s Queen is still pompous and self righteous but he’s Green Arrow to help those Oliver Queen can’t.The books overall blends a bit of Mike Grell’s longbow Hunters take on an Oliver who’s become disillusioned with his  cushy lifestyle and more at home with his bow and in the streets .However when contrasted with other characters he comes off as someone unwilling to fully let go his safety parachute.

This issue isn’t just a rebirth for Green Arrow but equally one for his partner in crime Black canary. Truth be told Canary had her own rebirth last with with her own solo book that reinvented her a Kung Fu fighting rock and roller. Canary’s introduction is pretty flashy but is probably the weakest part of the book and could have probably gave her a better reason to be in the series. Canary exists in this issue to call Oliver on his so holier than thou attitude and show him that periodically coming down from his ivory tower just isn’t enough to help the impoverished citizens of seattle.  The banter is where the pairing shines and you can totally understand why these two people will fall for each other and are positive influences in each others lives. The GA/BC rebirth Vignette had these two missing something, which thankfully without having to spelling it out this one shot gives them. 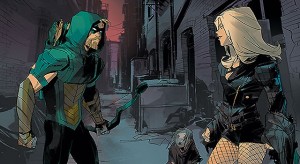 The art is just as good if not better than the writing on this book. Newcomer Otto Schmidt draws, inks, and colors the whole issue with such care and does a great job at showing the differences between the different  parts of seattle. His style has the exaggerated realism that’s become popularized by the likes of Batgirl, and Ms,marvel and does a great job from switching to Gritty street level, to Pseudo horror, and even romantic. He draws our heroes with a abrasiveness flirtiness to them working in tandem to show how out of his league Ollie is as he tries to peacock to get her attention. The Villain is appropriately, and Schmidt renders the action in such a way that you just see the speed and movement of the the Players as smooth as butter.

Green Arrow Rebirth comes as comic that didn’t know if it wanted to tell stories in the Vein of the uber gritty Longbow Hunters, or be more on the nose with both it’s politics and superheroics like the Hard traveling heroes were.  Percy and Schmidt however decide to blend both mixed in with their own take on the Rocker and the Archer who are throwing away the fame and fortune to fight corruption no matter what form it takes. Green Arrow is in my top tier set of heroes and this is the best that that the character has been since Arrow Season 2 and the Jeff lemire, Andrea  Sorrentino run. This is the best comic I’ve read thus far this year and i’m hungrily looking forward to issue #1 of this series to start.