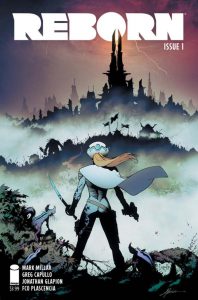 Reborn #1 is a comic that is both introspective and also just a chance for superstar penciller Greg Capullo (Batman, Spawn) to cut loose and draw dragons and fantasy creatures with inker Jonathan Glapion and colorist FCO Plascencia. Like most of Mark Millar’s creator owned work, Reborn is pretty high concept. It is about people, who instead of dying are reincarnated into a Middle Earth type fantasy world. The cold open focuses on a random side character for now, but the main narrative follows the life and times of Mrs. Black, an seemingly ordinary teacher and grandmother, who ends up being some kind of Chosen One character in the setting of a Zack Snyder meets Peter Jackson movie on speed.

The dragons and machine gun fire are super cool, but the best aspects of Reborn #1 are the human ones as Millar and Capullo meticulously tell the story of the life and loves of Mrs. Black, who reminded me a lot of my grandma. (Except Reborn‘s protagonist is an atheist or agnostic, and she is a devout Christian.) FCO Plascencia uses a warm color palette as Mrs. Black reminisces on her life from holding her best friend’s hand before she died of cancer to falling asleep on the couch while watching The Tonight Show with Johnny Carson with her husband and baby. Capullo also turns some of his most naturalistic art by giving Mrs. Black and the people she comes into contact with a variety of body proportions, and Mrs. Black’s wrinkles are a far cry from Batman’s strong jaw showing that inker 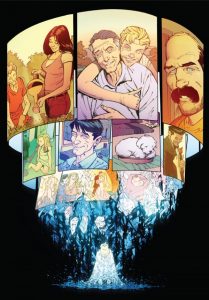 Jonathan Glapion has an eye for detail. Capullo’s portrayal of death is both haunting and poetic with a cascade of images of your past life before a cut to cool darkness and a world that is Lord of the Rings meets Terminator with a side of Conan the Barbarian.

The fantasy sequences are frenetically compared the slow scenes where Mrs. Black is sitting and thinking about her life. Whereas he uses a lot of thoughtful narration during the first half of Reborn, Millar takes a backseat to the art and colors of Capullo, Glapion, and Plascencia in these pages. Capullo has a real gift for capturing emotions in the middle of mayhem and doesn’t just show off his skills at drawing dragons and the warriors that fight him, but spends time showing Mrs. Black’s confusion about where she is as she went from a grandma to a hero in no time flat. The fantasy sequences are highly derivative of Tolkien with orc like beings, a bearded wizard, and basically Mordor as the setting, but the inclusion of Mrs. Black and her well-built backstory sets Reborn apart from other fantasy comics as well as the appearances of people from her past, like her dad and dog.

In Reborn #1, Mark Millar and Greg Capullo prove that even your grandma can be a hero as they flesh out the protagonist, Mrs. Black, before throwing her into a new body and a wild and wacky fantasy world. Capullo also shows he can nail the quiet, human scenes that separate pinup artists from true storytellers.