This week I review The Wicked + The Devine from Image, All-New X-Factor, All-New X-Men, and Black Widow from Marvel, Sons of Anarchy from BOOM! Studios, and Batman and Robin from DC. 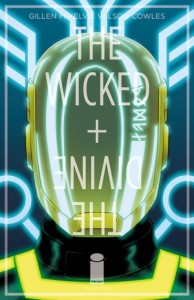 I love the structure of these issues with the time stamp before each section (and the map this issue was pretty cool). Laura is finding herself becoming deeply entrenched in the lives of the gods and it is really interesting to see how she reacts to and interacts with them. The foreshadowing of the Prometheus Gambit was pretty clever. I enjoy the colors, they aren’t overbearing and they really let McKelvie’s pencils shine. The thing I love about this series is that although they are gods, the characters are so representative of people you meet in everyday life, minus the powers. This leads me to believe that it is truly a story of humanity and not just gods, which is very perplexing and keeps me coming back every month. On a final note, I really like the reveal of the 11th god at the end. Can’t wait to see him next issue, everyone’s invited! 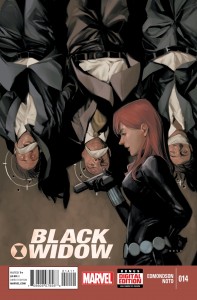 What an explosive issue, Natasha really finds herself in the thick of it this week. This is exactly what I would want a Black Widow movie or television show to be. It has a great supporting cast that really humanizes Natasha and doesn’t make her seem so alone, although she really is. The writing and art is so consistent from issue to issue with this book, and I always know I’m in for a treat. I love seeing Natasha outside of the Avengers books because you can truly delve deep into what makes her the Black Widow. And it is evident with her narration; I really like hearing what’s going on in her head throughout this series. Phil Noto’s artwork is simply beautiful and does a great job with Natasha and all the action she finds herself in. This is a must read series! 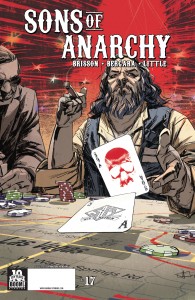 Bobby Munson’s night on the town in Las Vegas! This issue almost had the feel of the first Hangover film. And I know that might sound strange, but this done-in-one story is the tale of Bobby’s night of drinking with some Canadians that got lucky at the casino and wanted to party with a real outlaw. All in all it’s a fun little story and made me miss Bobby a little bit more. The artwork was just alright for this issue, Bobby’s likeness was there but some of the other line work wasn’t so strong. The colors are nice and subdued which really match the tone of the series; they are a little bit brighter this issue since it’s not as grim as some of the past issues. Ed Brisson really has these characters voices and personalities down and it is a fun ride still exploring that universe now that the show is over. 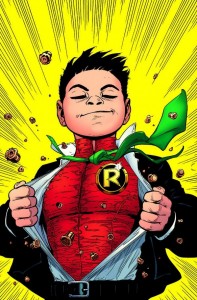 At first I thought it was silly that Damian was getting superpowers. Then with the method of his resurrection, it fit. And reading this issue, I loved the dynamic of Batman with a super-powered sidekick. It’s a new territory for him; he has worked with many powered beings but none that were a super-powered child of his. What I didn’t like about the whole powers thing, but makes sense to me because I know Damian, is his lack of subtly and restraint. I really don’t blame him though because I’d probably do the same in his position. As a reader though, it is surprising with his rigorous training that he would be more responsible with his newfound abilities. I get that there is a learning curve but he does seem rather sloppy through the first half of this issue. I like Damian’s story towards the end of the book, it’s good to see how much he really cares. The artwork in this issue is very pleasing, Damian’s nightmare is pretty creepy and it is oddly satisfying to see Robin flying everywhere. 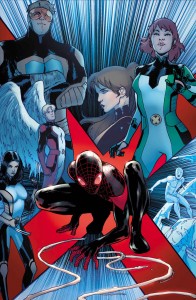 This book has gorgeous artwork and vivid colors. This series started with the amazing Stuart Immonen and now has Mahmud Asrar on art duties; this book is always visually appealing. I love some of the banter between the characters in this issue, which is really one of Bendis’ strong suits. A lot happens in this issue and just when you things are looking up for our time and space displaced heroes, things take a turn for the worst again. Ultimate Doctor Doom was an excellent choice for the villain of this story. This has been a really fun arc and I love seeing Miles interact with out 616 heroes. First this, then Spider-Verse, I have a feeling we will get even more when it comes time for Secret Wars. 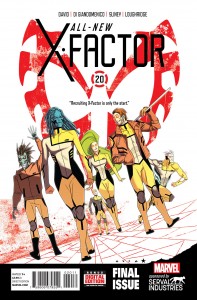 The final issue of All-New X-Factor is here and it almost leaves me with more questions than answers. If this is the final issue where will we see the ongoing adventures of X-Factor, because it seems as though Harrison Snow has BIG plans for the heroes of the Marvel Universe. So in a sense, it was unsatisfying. This team of characters that I was initially unsure of really started to grow on me; I was a big fan of David’s previous X-Factor run starring Jamie Madrox and this run seemed very uneven. With this issue guest starring Miguel O’Hara, the split art duties works here since Will Sliney is the artist on Spider-Man 2099. I really liked the artwork by both artists and the colors were pleasant. I wonder if we will see more of this in Spider-Man 2099 once Spider-Verse concludes because this story is certainly not over.