This is Green Ranger Year One! The Green Ranger’s addition to the team has brought new instability and uncertainty to the Rangers. With remnants of Rita Repulsa’s control still stirring in the back of Tommy’s mind, he must confront the fact he may be more of a danger to his new team than a help. As Rita plays the heroes against each other, her ultimate plan begins to take form, and vengeance for the Green Ranger’s betrayal will be unleashed on Angel Grove.

1. Structure – When this series was announced, one of my biggest fears was that each issue would just feel like an abbreviated episode of the series. Higgins does a great job of alleviating those fears with the premiere issue. You can already tell that this will be driven more by the characters and their dynamics than them fighting the Putty and monsters… though, we still get that as well! 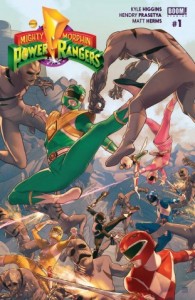 2. Modern Flair – With Fuller House just premiering on Netflix, it’s a reminder of the delicate balance a creative team must take in bringing back older franchises. You need to strike a balance between the things that fans find comforting and necessary while also modernizing so it doesn’t feel too dated or a relic of the past.

MMPR #1 nails this element right out of the gate. With one of the most clever ways I’ve seen in conveying a ton of information to the audience as resident side characters, Bulk and Skull, host a YouTube show dedicated to the Ranger Central in Angel Grove. Through their show, we are able to quickly learn the Rangers’ backstory and history up until that point (you have to remember that the comic starts mid-way through the original season) but also serves as a way to introduce the characters and the various attitudes of people in town. A vantage point we didn’t always get in the live-action series.

3. Green with Envy – As noted in the summary above, the first arc will focus on the latest Power Ranger, Tommy Oliver. The evil Green Ranger-turned-good guy who is just adjusting to his role on the side of good. Something that not all of the heroes are on-board with, and not something that Rita seems ready to let go of just yet. He gets some key scenes throughout the first issue, but it’s really the cliffhanger that leaves me wanting more!

4. Rainbow Rangers – The art in the book is top-notch. I’ve been a Power Rangers’ fan my entire life and I swear the Putty have never seem more alive than they do in the pages of the comic. I think the fact that they have actually facial expressions give them a sinister edge they were always missing in the show. On top of that, I love that each Ranger has a distinct look both in design and in fashion. Zordon is also given more life. Never felt that the talking giant head in a tube was goofy, but the art and reflection makes it pop even better!

5. Bulk & Skull – There’s a back-up story featuring Bulk & Skull, it is fairly short, but it seems to be building to a fun adventure. If I had one qualm with it, it’s the radical design difference between the Bulk and Skull presented in the main story and the one designed in the back-up. It seems like the back-up wants to focus more on the classic designs, which is cool. Just so strange being in the same book.

6. Angel Grove – I don’t remember the city being such a character during the original show. Here, we learn locations of things. We hear and see consequences of the Rangers’ battle. We see the Rangers in school more. Like I said earlier, we get to hear thoughts from the citizens. Its a minor addition, but a great one all the same.

7. The Little Things – Purely a nerding out entry, but I love the fact that the Rangers’ random speech during their fights have been kept intact. There’s nothing like reading someone shouting ” Hai-Yah!” to bring a smile to your face.

Review 7 (out of 7) – If you’re a Power Ranger fan, you owe it to yourself to check out this comic. If you’re not a Ranger fan still a really good comic.