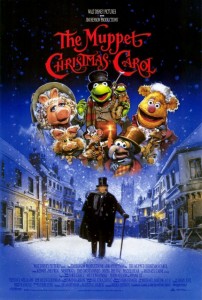 Christmas is coming, the goose is getting morbidly obese, etc etc. So, for this week’s entry, I decided to do something a little different. Instead of just me blathering on about one movie decided upon in a completely arbitrary fashion, I’ve gotten some of my friends and colleagues to write about their favorite Christmas/holiday movies! You might recognize some of their names, and I’ll be linking to their respective work on the tubes known as “the Internets”, so click on their names and check them out, and enjoy this JUMBO-SIZED version of A-Z of Christmas Cinema!

My two things I have to watch at least once every Christmas season are, strangely enough, both skewed Dickens adaptations: The Muppet Christmas Carol and Scrooged. Scrooged is hysterically funny, with a perfect cast and a wonderfully cynical central performance from Bill Murray, at the top of his sardonic and loosely improvisatory game. The effects are mostly practical, which goes a long way in my book, and the movie’s just… weird. It adapts Dickens’ story very loosely, hitting all the broad strokes but naturally letting Murray guide it where he needs it. It’s also AMAZINGLY funny.

The Muppet Christmas Carol, on the other hand, while tinkering with the formula as well, is actually one of the most faithful Dickens adaptations I’ve ever seen. And all while being within the anarchic and silly sphere the Muppets always inhabit. Casting Gonzo as “Charles Dickens” to narrate the whole film was inspired genius, as was deciding to not make Kermit the central character. His whole demeanor doesn’t fit Scrooge but is perfect for Bob Cratchit. Michael Caine, on the other hand, makes a wonderful counterpart to all the Muppet mayhem, and his Ebenezer Scrooge has just the right mix of bitter misanthropy and sorrowful regret. And the songs, oh the songs… I just love this movie, and make everyone I associate with watch it at Christmas, if I can. 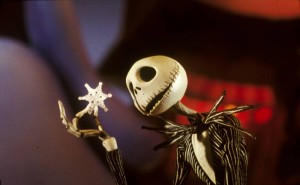 I remember the first time I saw Tim Burton’s The Nightmare Before Christmas. I was 13 years old, and this was probably the perfect time in my life to see this movie. I remember leaving the theater with my grandmother (who had taken us) and little brother after the film. As we made our way to her car, my grandmother shook her head mumbling,Â “That was terrible.” Â My brother (being the obedient child that he was) shook his head in agreement. I, however, had a different opinion. I felt as if I had finally seen a Christmas film thatÂ weirdoesÂ like meÂ couldÂ relate to; almost everyone in the film was dead, it consisted of our favorite color scheme (black), and it was a musical. What more could you ask for as an awkward goth kid? Oh, I’m sorry–did you say a hopelessly desperate romantic storyline? Sign me the fuck up! Tim Burton’s The Nightmare Before Christmas is the Rudolph the Red Nose Reindeer for future musicians and psychotics, and that is why I love this film.

So for Christmas, this kid gets a cute, fuzzy, little creature named Gizmo. Gizmo is a Mogwai. A Mogwai would make a great pet. Just remember three important rules: keep him out of the light; keep him away from water; and never feed him after midnight. Of course, all of these rules are broken, and the result is one of my favourite scary Christmas films of all time. Also, the reason I don’t have a tree in my house during the holidays.

“Mistletoe can be deadly if you eat it.”
“A kiss can be even deadlier if you mean it.” 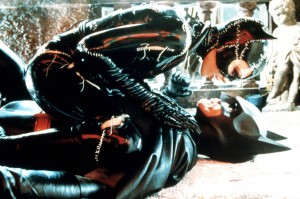 Okay, so, Tim Burton’s last pass at the Batman franchise, Batman Returns, isn’t necessarily a jolly Christmas story.Â  But it does have a jolly fat man (okay, less ‘jolly’ and more ‘batshit insane’) with some festive helpers (penguins with rockets strapped to their backs) and at least one elf (this is the only “Michael Keaton is short” joke I will make, I promise).Â  And several of the Bat/Cat flirtations, like the one I mentioned above (key in the film’s obligatory moment of “oh shit, YOU’RE the person I’ve been fighting?”), nod to the holiday season.Â  And, of course, Catwoman’s big exit, taking multiple shots to the chest before telling her boss “2 lives left, guess I’ll save one for next Christmas.”Â  It’s just a shame we never GOT that “next Christmas,” and instead were asked to accept the stand alone Catwoman “movie” as an acceptable substitute.Â  No.Â  Just.Â  No.

Home Alone remains one of those truly classic Christmas movies for me. I dust off the first and second film every year for Christmas to watch the adventures of Kevin and the Sticky/Wet Bandits. While some things do change with age, stuff like their travel arrangements not really being possible in this day and age, and me thinking that Kevin is a bit of a psychopath now that I’m older, it still remains an enjoyable romp. Aside from the fun dynamics between the leads, there’s also the music. One of the most memorable Christmas themes that always cheers me up. It also features a wonderful rendition of Carol of Bells, and the music that kicks in when Kevin realizes its time to defend his own! All in all, Home Alone continues to remain an enjoyable Christmas film to me, year after year. Just avoid watching any of the sequels past 2! 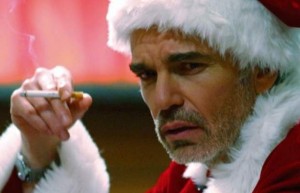 In my view of Christmas movies, Bad Santa was one of the more hilarious and wrong experiences ever. Terry Zwigoff created this unlikely Christmas film. Billy Bob Thornton playing a brilliantly wrong interpretation of a department store Santa, that’s one unforgettable experience. I remember the first time watching Bad Santa with my parents and my Mom’s reaction still sticks with me. She isn’t a fan of profanity and twisted humor normally, and she ended up loving it. To say the least, I was surprised.

In the midst of the demented premise, there is an inner sweetness to the film in Thurman. He’s one of the few innocents of Bad Santa, his love of Santa and caring nature is a counterpoint in the film, which helps to ground the movie. It’s amazing to realize that this is also John Ritter’s last role he filmed before he died, making this movie strangely poignant. It’s a good film and if you’re in the mood for a demented take on Christmas, look no further than Bad Santa.

When I was asked to contribute to this A-Z column for Nerds on the Rocks, my initial reaction was to pick the most anti-Christmas Christmas movie I could think of. It occurred to me shortly afterward though, that more people should embrace things for what they are and as it turns out, I actually do have a Christmas “movie” that I have watched regularly every single year since its release.

I’m not big on Christmas. I’m a Halloween man through and through. I don’t put up a tree and I don’t carol and I don’t lay out cookies for Santa (I eat them because they’re delicious). As it turns out though, Steven Moffat is VERY big on Christmas and his inaugural Â Christmas Special for Doctor Who cheers up my holiday spirits every time I watch it.Â Titled “A Christmas Carol,” very much in honor of Charles Dickens’ novel, the story is a retelling of the Ebenezer Scrooge tale using time travel instead of ghosts and throwing in cryosleep coffins, flying sharks and a spaceship hurtling towards an alien planet’s surface just for good measure.

First and foremost I think it’s important to state that this episode works wonderfully as an introduction to Doctor Who. You don’t need to know anything about the series going in and there are no storyline threads that are even tangentially discussed in this episode. 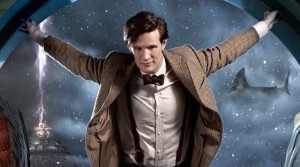 In a nutshell, the story is about a rich old miser named Kazran Sardick, the de facto dictator of an unnamed alien planet. He loans out money to the very poor people of his city in return for a family member, which he keeps frozen in an underground chamber until repayment is complete. The Doctor is brought in to save a crashing spaceship that can only be saved if Kazran agrees to turn off his machine that controls the cloud layer of the planet. You see, he keeps the clouds in a violent whirl to keep the flying fish up in the clouds and not down in the streets. Unfortunately for the passengers on this ship, Kazran is unwilling to allow a landing because, well, he’s a dick. And he runs the planet. So he is allowed to decide who lives and dies. What better way to turn an lonely, angry old man into a philanthropist than to re-enact A Christmas Carol on him? That’s the Doctor’s plan – but will it work?

I’m leaving quite a bit out of the plot because it is better experienced blind. It’s possibly the best written episode of Doctor Who in the entire modern run, with sharp dialogue, a very expertly framed story and plenty of callbacks and foreshadowing. Despite it dealing on a very core level with time travel, there are few if any paradoxes or “tricks” pulled to swerve the story in the desired direction. It’s a story about first loves and lost loves and the beauty and tragedy of having a human heart told from the perspective of a man that has two non-human ones. It’s also very much a story about Christmastime and what it means to humanity. It’s also a story where people get hunted by a flying great white shark, in case you’re not into the whole emotional thing.

Doctor Who‘s “A Christmas Carol” is an hour of TV that I make a point to watch every year in December because it reminds me that humanity is halfway out of the dark. Technically that means the winter solstice, and every day after christmas is a day that we get more and more daylight hours. ButÂ it’s alsoÂ proof that if we want, humanity can be a powerful force for good.Â Every time we celebrate Christmas with the ones we love and learn to share that love with the people around us, we take one step closer towards the light.

Thank you Steven MoffatÂ and thank you Doctor, for making me less of a Kazran Sardick every year.

There will be no column next week, due to it being Christmas Day and so forth, but I’m going to try to do something extra special for the New Year’s Day column! Thank you all so much for reading, and be awesome to each other.