After taking a 2 month break for a Original Sin Crossover* Loki returns to his own book and his thrown straight into another crossover: AXIS** 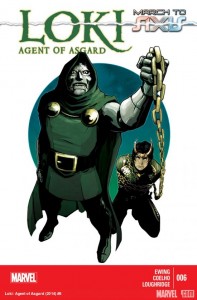 While the Original Sin crossover mini-series left behind the usual light tone of Al Ewing’s Agent of Asgard series I was happy to see it return this month as if nothing as changed*** . This means even when Loki is facing off against Doctor Doom, the story still maintains a fun vibe as Loki brings up such important questions as “Why do all your robots look like you?” while facing off against everyone’s favourite tyrant. As for Doom himself, I rather enjoyed his back and forth with Loki and thought Ewing had a good handle on the villains tyrannical monologues.

I didn’t read the Original Sin series and I’ve also got absolutely no desire to read AXIS, but Ewing promises that won’t be necessary to enjoy this crossover and thus far he’s doing a good job of keeping to his word. While it remains to be seen how closely the book will tie into the “AXIS” event it, perhaps unsurprisingly for a comic featuring Doctor Doom, follows up on a few recent threads from Fantastic Four but Ewing doesn’t let not following the recent FF adventures take away from enjoying the issue.

The art this time comes from Jorge Coelho, standing in for Lee Garbett (who’s taking a well deserved break after following up the first 5 issues with significant work in the Original Sin Thor/Loki crossover series) and thankfully he does a bang up job of fitting in with Garbett’s art style and helping the book maintain some artistic continuity that certain other books on the stand could really use.

Review 5 (Out of 7) – When the book went up to $3.99, my standards for it also increased, especially coming in after the Original Sin detour with Angela, but based on this issue I’ll stick around for the foreseeable future. While someone may frown over the current incarnation of loki for being too tumblr/teen friendly (The 2 One Direction references in the first 2 issues were almost too much for me even) he’s a lot of fun to spend time with and that’s something I always look for in my comics.

(*My thoughts on which are still coloured by the fact that I don’t like the character Angela or understand why Marvel is making her Thor’s sister but I won’t get into that here)
(**Or SIXIS depending on how you read that downright odd choice of font for the event title)
(***One thing that did change though was the price, while the first 5 issues were $2.99 Marvel sneakily increased the price over the 2 month absence)