This one kicks off with a bang, as the series’ title (always inventively worked into the opening pages) is written in white lightning. Following the untimely death of Lovey (Harrow’s long misunderstood “good witch”), it looks like outside forces have pushed best friends Emmy and Beatrice into all-out confrontation. Beatrice, recognizing the dangers Emmy and the haints pose to the citizenry of Harrow, delivers a forceful ultimatum: leave. Since the first issue, Emmy has faced the threat of banishment (or worse) due to her supernatural heritage but has stood her ground against all foes, using her powers to establish a new, peaceful order (or so it seems). But even the smallest chance of that power being misused has bred mistrust and, unfortunately for Emmy, Beatrice’s recent magic training has 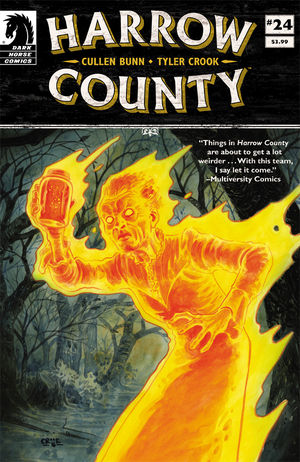 made her quite formidable. Their battle is equally filled with sorcery and emotions, as each teen is reluctant to seriously hurt the other but duty-bound not to relent.

When the seeds were sown for this showdown, I thought we were many issues away from the actual battle. Another writer would’ve milked this arc, deflating all the tension with issue after issue of redundant dialogue. But Bunn plows through the obvious before going on genuinely surprising detours. From Kammi’s demise and the revelations of Emmy’s true lineage, right up to Beatrice’s antagonist turn and Lovey’s death, Bunn has woven a dark, Southern fairy tale of witches and monsters that rarely conforms to convention. Emmy is our protagonist but it’s hard not to see Beatrice’s motivations. Are we 100% certain 1) Emmy can control ALL the haints or 2) that Emmy won’t fulfill her evil destiny? All this drama (did I mention the fight is in a full on thunderstorm?) and the series even manages to redeem my least favorite issue (#12) by incorporating a plot point for this chapter’s truly shocking finale.

But #24 wouldn’t be as exciting without Crook’s inspired art, building on his work throughout the series’ run. Despite usually keeping things in the dark, the lightning flashes keep this nocturnal clash fully illuminated. There’s a lot going on, from the weather, to a multitude of haints, poisonous frogs, and the aforementioned explosive conclusion. Crook delivers on all fronts, injecting life and mood into every panel. All I can say is after this arc concludes I don’t know where the series will go.. but time and time again Bunn has surpassed my expectations with every new chapter.

Review 7 (out of 7) – Just wow. As perfect an issue of “Harrow County” that’s ever been. A sum of 2 years worth of storylines, exceedingly beautiful (and haunting) artwork, and a final panel sure to thrill fans. September 13th can’t come soon enough.