Who doesn’t love a crossover? In theory at least. They may not always work, but fans bought JLA vs The Avengers, went to the theaters to see Freddy vs Jason and who doesn’t remember when Steve Urkel would show-up on Full House and Step by Step? (Okay that last one is a bit of a stretch!) But crossovers will always tingle that joy sensor in our brains. Of course when I heard Cartoon Network was doing a big ole crossover across their comic series, that joy meter shot up! How could I not look forward to all of these great properties entering a fun-filled adventure! 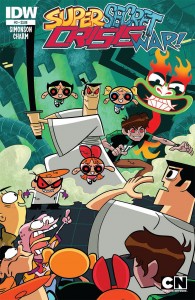 And happy to report that the series has delivered so far. Teaming up a random assortment of Cartoon Network stars (The Powerpuff Girls, Samurai Jack, Dexter, Ben 10 and Ed, Edd and Eddy) against a much more believable League of Extraordinary Villains (Mojo Jojo, Aku, Mandark and Vilgax) since Ed, Edd and Eddy were accidentally captured as well they don’t have any corresponding villains.

In this issue, the heroes have broken-free only to realize they are floating in space and the villains are creating a robotic army modeled after the team of heroes. The heroes try to sneak through their base, but are split during a battle with the robot army. And this is my favorite part of the comic as we get mini-groups and get a fun play on their various personalities. Bubbles and Samurai Jack are pretty adorable together, both promising to keep the other safe. Blossom and Dexter end up together, and it’s a clash of personality. Especially when Dexter drops his trademark “woman” line, which doesn’t fly as well with Blossom. Finally, Buttercups and Ben are paired up, and don’t get as much time to really clash. They have pretty similar personalities, which is just to brute force their way through things.

The 3 Eds are splintered off as well, but since we always got to see their interplay, the comic really doesn’t try to do much with them. And really my one qualm with this issue is that they really don’t get much to do. I imagine they will eventually get a huge heroic moment, but twas far they are just given their usual personalities with little to contribute to the team’s efforts.

On the other end of the spectrum, Mojo Jojo and Mandark are beginning to think they may have gotten in over their head. While Aku and Vilgix are willing to blow up the world, Mojo and Mandark simply want to enslave and control Earth’s populace. They aren’t noble villains, just a bit less insane. Them trying to prove themselves is a fun little subplot, but sadly (To be a cliche) they are playing checkers while the others are playing chess.

The art is a real star here as well. It is a nice and clean look that really captures the spirit of the animation. What really solidifies it is that the art feels uniformed even though coming from different artistic backgrounds. A prime example of that is how they have the spirit of Aku, while still making him feel like he belongs in the same universe.

Review 6 (Out of 7) – This is a fun crossover. And sometimes fun is all you need.