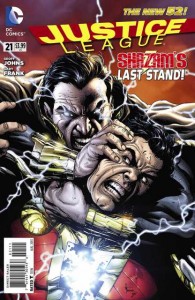 Long has been the road to Trinity War and Geoff Johns prepares readers by putting the final piece in place.Â Shazam upgrades from backup status to main feature in this issue. Face to face with Black Adam, he uses his powers to empower his friends to help him protect the city from the Seven Deadly Sins. Doing so helps him discover how to defeat Black Adam without magic.

Seeing Billy Batson change from a hot mouthed, disrespectful punk into a likable hero has been worth the long journey from backup to backup. His hot mouth may not disappear entirely, but it’ll be interesting to see how it gets him into/out of trouble in the New 52 universe. The revelation that Mr. Bryer was the most rotten person in the city wasn’t entirely surprising because Johns did an exceptional job writing him as such a horrible character. If his appearance on the page illicits feelings of disdain than the writer did his job. His humiliation after the Deadly Sins exited his body will likely make several readers smile.

Praise needs to be given to Gary Frank for how wonderfully his art helped tell this story. Specifically, all the lightning and magic effects look spectacular and add wonder to the page. He also shows real talent by being able to draw kids that actually look like kids. When they’re in their adult Shazam-ed forms, they even still look like their child counterparts.

Obvious highlights of this issue include Darla, Freddy, Pedro, Mary and Eugene being “Shazam”-ed and Tawny the tiger. Both are representative of Johns’ writing style to infuse fun, excitement and surprise into his stories. However, readers may be unsatisfied by the lack of a solid resolution to Mr. Bryer’s antagonism of Billy and clarification of the whereabouts of the Seven Deadly Sins.

Johns and Frank bring the Shazam backup to a spectacular and satisfying close in a story filled with excitement, surprises and plenty of lightning. Notably absent from the book are the other members of the Justice League team. Since Trinity War begins next month, this book was all about finishing Shazam’s New 52 origin. No reader will want to miss the next issue. 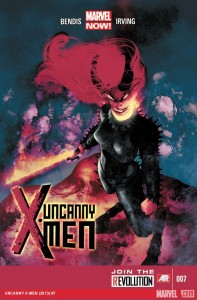 The X-men have been on a roller coaster of events since the devastatingÂ House of M. They are now wanted fugitives with broken powers who have taken in new mutants to train for the coming revolution. As such, it’s unlikely they can prepare to lead a team into such a future when they themselves are so broken. This story arc resolves half of the problem by helping them that they need to train just as badly as their new mutants.

This issue concludes the X-men’s battle against Dormammu. Illylana has lost control of her powers just like the other Pheonix Five. She, along with the X-men are pulled into Limbo and forced to fight mindless demons. None of them are prepared for this battle, not even the senior X-men.

For new X-men readers, this issue gives a bit of character information on Magik, where she draws her powers from, and her different personas. Since Doctor Strange is an Avenger– and the only person that can help her regain control over her powers– it was curios how Bendis was going to resolve the situation. She has the power to transport herself through time and space so Bendis sends her to the past where Strange is not yet an Avenger. Meanwhile, the ordeal in Limbo made Cyclops accept that they all, senior and new X-men need to train. Christopher heals his first major battle injury and Goldballs Fabio has a meltdown and demands to be returned home.

Frazer Irving had some amazing art in this issue that helped sell the idea that these characters were actually in Limbo. The florescent lights of the X-men’s powers, Dormammu’s and Magik’s fiery bodies are surrounded by blackness. Consequently, everything looks chaotic. This is problematic because the resulting book can be difficult to read.

The best thing about this book is it makes the X-men understand how broken their powers are and decide to begin training to fix them. However, the art style –while gorgeous– make it difficult to understand what was happening. Thankfully, the X-men are returned to Earth. Cover art for the next issue shows Cyclops and Magneto fighting. Readers will have to pick up the issue to find out if the two will be parting ways or if it’s simply the two caught in a training match. 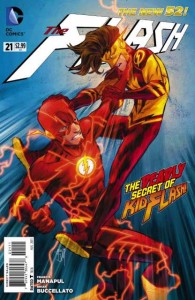 The Flash continues his search for the person responsible for killing people who were touched by the speed force. The killer is using a similar lightning symbol which leads him into a chase around the world with Kid Flash.

Kid Flash was not a likable character and may come off to some readers as an immature jerk. Nonetheless, readers hoping to learn more about the character’s New 52 origin won’t find much here other than he doesn’t get his powers from the speed force.

Francis Manapul and Brian Buccellato are one of the hottest duos in comics. The combination of Manapul’s art and Buccellato’s watercolors result in gorgeous pages and a fun read from start to finish. They have crafted a series that is uniquely them. Several pages exemplify the quality of their work. The opening page sets up the story perfectly by showing the Earth from space and zooming in to reveal two fast moving streams of red and orange light. The following page reveals that it’s The Flash and Kid Flash along with some wonderful text layout. Midway through the book, there is another gorgeous two page depiction of the chase with several panels in the background representing the many different countries the characters pass through. Readers might find it difficult to walk away feeling disappointed with this book.

The long awaited meeting between The Flash and Kid Flash is an exciting and gorgeous milestone for the New 52. The latter runs so fast that he learns what happens when you reach escape velocity. This was a great science moment and reminds readers that there is a limit to how fast speedster heroes can move. The book closes on a very menacing Reverse Flash who has just killed another friend of The Flash. Readers should catch next month’s issue to find out what happens when Reverse Flash goes after the remaining two people touched by the speed force: Iris West and The Flash.