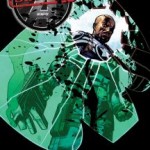 Another great issue by this team. Â I think Secret Avengers is one of the more underrated books at Marvel right now, mainly because it meshes a spy/espionage genre with political drama, a little humor and superheroes. Â Spencer has set up many moving parts, the first of which is a sequel to Hickman’s Secret Warriors in so many ways, mirroring what happened w/ Hydra, Fury and HAMMER but now with the new SHIELD and AIM. Â He also uses the set-up of the mind-wipe technology to pull one over on the readers, though with many hints during the comic that what we are seeing isn’t exactly what is happening. I also commend Spencer for utilizing a great mix of characters in this series so far, and in this comic. Â He uses Hawkeye, Black Widow and Hulk (and uses them well) to help bring in the casual Avengers fan, but in many ways the heart of this book is SHIELD characters like Fury Jr, Coluson, Daisy, Hill and Mockingbird. Â Ross, as per usual, has great art which fits with the more realistic tone of this book and really helps detail the emotional issues that the characters are dealing with during this issue. 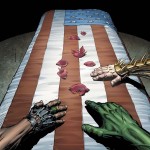 Â Well, as we all expected it, the ‘death’ of last issue was not what it ‘seemed’ to be. Â We also get the introduction of Green Lantern Simon Baz and his mentor/observer B’DG for those who haven’t read Johns run on Green Lantern. Â Mostly this issue is a explanation of some of what’s been going on with the Society of Super-Villains (whom seem to be a small group at this moment) but still leaves many questions for the Trinity War and Forever Evil. Â We also get to see the team gel together and finally this odd roster seems to start to work and make sense, but we’ll see. Â I have to say that Booth’s art is a huge improvement in my opinion over Finch (mostly cause Finch’s art dealing with females make my spine hurt) but was a pretty packed issue with a lot of heroes and villains, and was slightly confusing. Â We also see Steve Trevor seemingly manipulated by Amanda Waller, and while both act to my expectations, but I hope that there is more going on than a classic manipulation by Waller of heroic Trevor.

Â Wow. Â Just wow. Â I had only one problem with this issue, that I was confused slightly by one sequence. Â However, this issue reminds me of the famous silent issues of Gi:Joe featuring Snakeyes and Manhunter, but taken to a whole different level. This book is a treat every month, really filling a niche that many didn’t know exist and is often one of the best books each month. Frankly, Aja is the start this month (along with Lucky, the pizza dog) and I while I have always admired his art, I think this issue in particular will put him on another level of great comic artists.