I love weeklies, and I hate weeklies. In order to keep a weekly series interesting and on-going, the books tend to juggle multiple stories, and just by the nature of the beast you come to love some and come to loathe some. Whenever the ones you loathe get the focus, you tend to really hate weeklies, and then you get weeks like Batman Eternal #21. 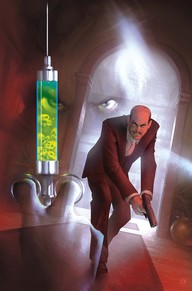 For 20 issues, Batman Eternal has been building up various types of stories. We’ve had a mini-murder mystery in Commissioner Gordon’s story, we’ve had a bit of the supernatural in Batwing and The Spectre’s story, we’ve had a police drama with the GCPD, Falcone and the Penguin story arc. For the most part, these stories have worked independently of each other with crossover coming in the way of the Bat-Family investigations.

With Batman Eternal #21, a lot of these stories start to collide and we are given a lot of twists and turns that will surely drive the back half of the series.

The issue starts with former commissioner James Gordon being sentenced to life in prison for killing 123 people during the first issue of this series. With Gordon in jail and the interim commissioner being charged with corruption, the “hero cop” of the series Jason Bard has been appointed as the new commissioner. He has done a good job of cleaning up Gotham and gaining the respect of his peers including Harvey Bullock.

At the same time, Batman and his Bat-Family have obtained evidence that would clear Gordon, but it may prove too late. Before Batman delivers the information though, he has a little face-to-face with Carmine Falcone who is on his way out of Gotham. Here we learn that there is a lot more in play than what Batman or anyone knows, and the rest of the issue is filled with those revelations.

Without spoiling too much, we have the return of a classic Bat-villain in this series, who is sure to cause havoc for Bruce and company. Another twist, was kind of expected, but glad to see them pull the curtain back on it. The intrigue in that reveal deals more with how much Batman knows or when will he know.

Finally, there is another potential reveal in the book, and one of the more understated aspects of Batman Eternal is the mini-story with Alfred and his long-lost daughter, Julia. Their relationship, understandably, is strained and Alfred can’t close the gap between them because he is holding a huge secret from her that he can’t share. Circumstances in this issue may force his hand, and I’m really curious to see how it all goes down. There’s a bit of mystery around their story because you never really know the angle or if there is one. 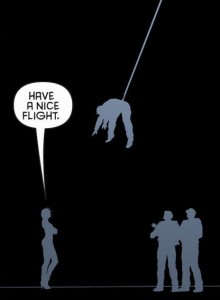 I mentioned above how the central story in any issue can be a bit of a distraction, art works the same way. There’s no way to get a single artist on the book so they have to alternate, and luckily enough for his important issue the artist is top notch. Some great use of lines. One of the cooler panels is the shadow usage for the removal of Falcone, let’s go with that. And of course, the big splash page reveal of one of these returning foes made for a treat. And facial were expressive. One day, I will understand my fascination with facial expressions in comics.

Review 7 (Out of 7) – If you haven’t been reading Batman Eternal, issue 21 would be a terrible place to tell you to jump on. But since it does seem to be the culmination of a lot of the first half arcs, perhaps now is a good time to get in as the story enters phase 2.