It is time. Bruce Wayne has reclaimed his true past as Batman. Now he must descend into the cave and face what he once was. Can he truly leave behind a life free from the pain and anguish of the Bat? Can he plunge once more into the madness and purpose that once consumed him? In this special, thrilling issue, watch as the fate of Bruce Wayne, and Batman, is decided once and for all. 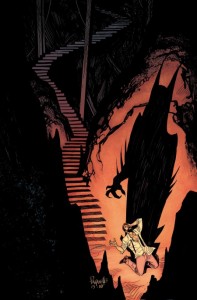 1. A Scattered Mind – Depicting the human mind isn’t an easy task in any medium. There’s really no way to visualize a person’s thought process. Paquette decides to mix it up a bit in this book by having the thoughts be connected but not equal. Some are presented as connected thoughts while others overlap with actions. Other spill from one thought to the next. It works in the context of the story, but it also helps to mix up the panel layout from page to page. Visually, the book is never boring.

2. Bat- Brains – Speaking of Bruce’s mental state, I love how the comic tried to reconcile so much of Batman’s lore in Bruce’s head. Stuff like being the Mayor of Gotham and working with the Court of Owls… or working with Joe Chill. It was a nice nod to fans but also kind of showcase how memories and thoughts can sometimes mislead you.

3. The Other Batman – The story focuses on Bruce’s resurrection, but I was surprised we got no type of update on Gordon or Bloom really. Like not even a page or two or something on the news in the background. Again, I get the focus but seems strange to not toss the main arc story a bone.

4. The Bat-Up Plan – I get that Batman seems to be a person who builds contingency upon contingency plans, but I wasn’t quite sure how the Bat-personality/memory conversion was meant to work for other people…. I mean I went with it because made for a great issue. It just seems really silly and oddly needed.

5. A New Batman – I know it… well not sure if dream sequence is correct, a mental construct? But the new white and hold Bat-suit that Batman got to wear for a few panels was actually pretty neat. I wouldn’t mind seeing more of that. And his bat-gyro. 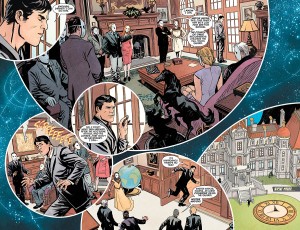 6. A Parent Should Never Have to Bury Their Child – The sight of an emotional distraught Alfred on his knees begging Bruce to continue living his life… to leave the past and his creation behind. The comic did a damn good job of earning that moment, and even for someone like me it hit like a gut-punch. I mean being a father-figure who has to see his son sacrifice his second chance at a normal, happy life is just devastating to watch unfold. And more than that, just the sight of Alfred’s missing hand… showing that he too has lost something in Bruce’s never ending battle being the one to reach out to Bruce with. So sad.

7. The Gut Punch – And yet… not the worst part of the resurrection. I won’t spoil the ending, but just when you think that Alfred’s sacrifice was the roughest thing to go through in this issue. Snyder finds one last curve-ball to toss your way and it knocks you to the ground hard.

Review 7 (out of 7) – In an industry that is cynically driven by death and resurrection, this is by far one of the best returning chapters I’ve ever read. The emotions were well-earned and they packed a hell of a punch. Welcome back, Bruce.

P.S: I got the Neal Adams variant cover for this issue, and it’s so clashing with the content tonally. But a really fun cover.