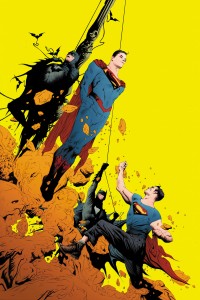 First off, Jae Lee is very gifted. The art is very different then anything I’ve seen. I wasn’t sure how I felt about it at first but as the issue went on there were a couple of panels without text that really made me fall in love with the art.

The story isn’t bad but I would have liked to see this story happen after the series had some foundation and this “villain” whomever it may be might have popped up here or there.

Overall, Lee’s art is what makes this comic worthy of a purchase, otherwise I might suggest getting it when a trade is released because the wait in-between issues does help an already confusing story. I hope DC finally will decide to do a recap page for some of their series.

I can not stress enough how impressed I have been with Geoff Johns and his Aquaman run. I find it impressive that he was able to take Green Lantern and make him relevant again. This seems to be happening currently with the King of Atlantis.

Aquaman #22 continues our story of the dead king, can this story be in an Aquaman movie please, and brings more twists and turns then the pervious issue! The revel about Aquaman’s ancestors and the whole story with the first king was more then enough to satisfy this issue, but we also get the ongoing attack on Atlantis and the breakout attempt!

Overall, this was an action packed issue that had some of the best art I’ve seen in the Aquaman series so far. The amount of detail and color put into this issue made me stop and look at different panels for a while. If you are not reading this series I suggest you go and read all 22 issues, because you won’t be disappointed. 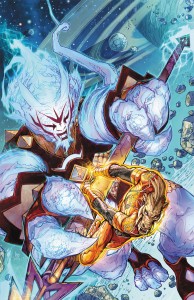 Larfleeze #1 was the book I was hoping for from one of the most fun characters from Geoff Johns run. That issue made me believe that Larfleeze could carry a series on his own. The issue was fun, exciting and had plenty of that Larfleeze humor! This month we still get that humor, but there is something lacking for most of the issue, LARFLEEZE!

We get more of story this time around about the Larfleeze’s servant and digs into the backstory of the main villain Loard. The reveal at the end seems to suggest that this servant may have a bigger role to play in this series and he could be around for a while as a main character.

We get some beautiful art again, things had a lot of detail and the battles between Loard and Larfleeze were sharp and pleasing to the eyes. I really enjoyed the short backstory about Loard and there being another universe beyond our own that is basically in ruins because of Loard and his family.

Overall, Larfleeze #2 had some interesting backstories but with the lack of our main character, I was rather upset. I felt it was to early in his solo series to have Larfleeze absent for 3/4 of the issue. I am interested in the servant and what role he plays going forward as well as our villain, Loard.