In the conclusion to the Edge of Spider-Verse mini, we meet Peni Parker and SP//dr! 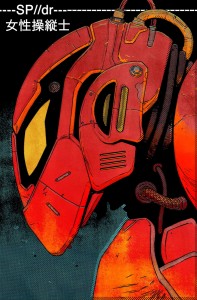 Gerard Way’s new solo album that came out at the end of last month. I know Gerard Way has been writing comics for years and this is the first comic I read written by him and I was pleasantly surprised. I love how music is infused in the issue; I’d expect nothing less from him. This issue felt a lot like Pacific Rim to me. Girl loses parents. Gets bitten by SP//dr and forms a bond with it. Then she gets to use a robotic suit to fight bad guys. And I really enjoyed the relationship that Peni has with SP//dr. It’s unique because in most of the spider origins that I’ve read, the spider disappears or dies. And this one seems pretty powerful which makes me think, is it Peni Parker or SP//dr that is being hunted or both?

I really like the version of Mysterio that Peni faces. Very different from what we’ve seen. Although he’s not very formidable, it’s nice to see different spins on characters that we have known for years. While this issue does seem anti-climactic, I like the way it ends. It is a quick origin followed by some great action sequences with a cool little battle then a team-up with who I’m assuming is Daredevil. And he looks amazing. I really liked the art style for this issue. There are some pretty cool character designs. It’s also fun to see different artists draw the other Spider-“Men” that show up in these issues I would love a SP//dr ongoing series. I’d even take a mini-series by this creative team. It’s a world I think would be great to explore knowing that individuals like Daredevil and Mysterio also inhabit this earth.