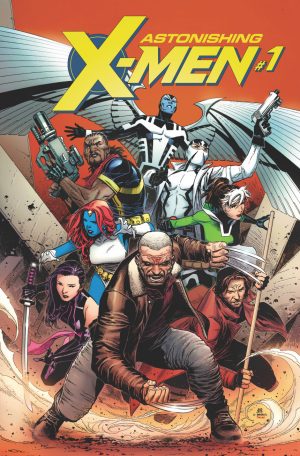 Astonishing X-Men Astonishing X-Men. Penciler Jim Cheung and a host of inkers, including Mark Morales, Guillermo Ortego, and Walden Wong give each X-Man a splashy, introductory half of a double page spread and then put them to work.

Astonishing X-Men #1 is definitely worth $4.99 because Soule and Cheung plot out a full action scene between a possessed Psylocke and the X-Men, set up the overarching plot for the series and hurl them into the new setting of the astral plane, and finally, like a cherry on top, drop a juicy cliffhanger. One of the joys of reading X-Men comics is when a writer and artist use the team’s powers creatively, like Gambit charging up his basically boyfriend Fantomex’s ammo clips so he can take out some psychic projections or when Old Man Logan starts shooting at the RAF planes because he doesn’t want any X-Men to accidentally die on his watch. During the fight, colorists Richard Isanove and Rain Beredo vary the purple and pink of Psylocke’s psychic projections (Usually butterflies.) depending on the level of danger. There is a sweet pink when the initial battle comes to a close thanks to the complementary energy abilities of Rogue and Bishop. They have a bit of flirty chemistry too although Bishop is all business about dark timelines not coming to pass.

Sure, Astonishing X-Men #1 has a lot of cool action and will take you back to the days of John Byrne, Art Adams, Jim Lee, Frank Quitely, or insert your favorite X-Men artist here. But Charles Soule and Jim Soule also make this X-Men team feel like people, not action figures. Psylocke isn’t just a victim/excuse for a plot, but the team leader, who organizes the expedition to the astral plane and shuts down Fantomex’s gloryhounding when the fate of the world’s minds is at stake. Angel and Bishop stay behind to protect her while she is projecting the other team out and have a bit of a tiff about their approach to this. 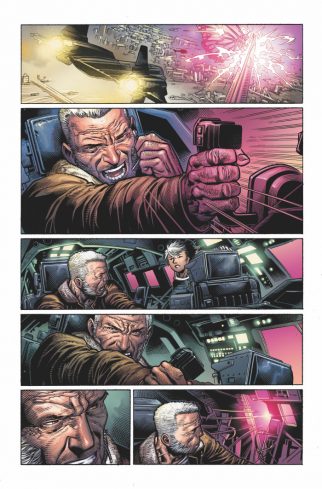 raise his wings and block bullets or catch and rescue people. He’s the traditional superhero to Bishop’s more pragmatic approach. If one of the team member’s gets psychically possessed, an energy blast to the head is his solution. He thinks that Angel is potentially holding back his abilities even though those Archangel powers could unleash a terrible future like the one he’s from. The X-Men are a family, and there are definitely squabbles even if they’re fairly united against an outside threat in this series.

In spite of these disagreements, the X-Men are pretty freaking heroic in Astonishing X-Men #1. Cheung, Morales, Ortego, and Wong’s art has a lot to do with it as they unhesitatingly leap into action when Psylocke psychically calls out to them. It’s majestic and inspiring when Angel uses his wings to cover the team from the projections, or when he flies up Bishop to sort out this energy problem. Also, Rogue flies towards her without saying a word until she’s up close, and Old Man Logan walks through a hail of debris getting the civilians out of the way while he bleeds and takes the brunt of the assault. Sure, Fantomex cares more about looking cool with his dual wielding pistols, but not everyone on the team can be selfless warriors. His words and actions allow for plenty of “not amused” reaction shots from the rest of the team, who know the life and death stakes of their mission that’s not yet another superfluous jewel heist.

Astonishing X-Men #1 is the glorious mutant epic that I’ve wanted from Marvel since they relaunched the X-books with ResurrXion. Jim Cheung brings the intense, widescreen action with Mark Morales, Guillermo Ortego, and Walden Wong helping him nail the details, and Charles Soule ably fills in the team’s personalities and general dynamic while crafting a hell of a hook and a threatening villain for the series. Richard Isanove and Rain Beredo make the psychic combat look both cool and creepy with their colors and put a shiny finish on this summer blockbuster of a comic book

Overall: 7 (out of 7)- Astonishing X-Men #1 has  heavy hitting visuals, nuanced characterization, and whiz bang brain action and sets itself up as the flagship X-Men book in one fell swoop.