Let me preface this by saying how much I love The Twilight Zone, I remember religiously watching marathons back when SyFy was The Sci-Fi Channel. Rod Serling and his creation aren’t just science fiction icons – they’re American ones. 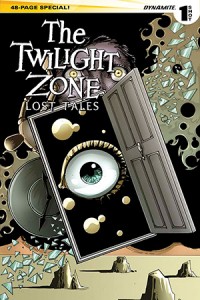 Dynamite Entertainment is bringing the banner back in a big way, with famed, multi-genre scribe J. Michael Straczynski at the helm of the proper title. It has been quite some time since we’ve entered a dimension “not only of sight and sound but of mind.” The last comic book company to run the spooky label was the now-defunct Now Comics back in the early 90’s, piggybacking on the success of the late 80’s revival of the TV series. Interesting side note: one of Now’s licenses was Married.. With Children. Bundy shenanigans in a comic book – can you imagine? But I digress.

When I cracked open this 48-Page Special, I felt a bit lost without the familiar cues of the show. But I was on board after seeing an I-can’t-believe-it’s-not-Rod-Serling monologue on the first page. In “Hangnail On A Monkey’s Paw” we see the titular wish-granting appendage used in a revenge plot. Although this first story is the longest at 18 pages I felt it needed more to flesh out the action. I found myself flipping back and forth between the last two pages to see if I missed something before the twist.

There’s something a little jarring about seeing a Twilight Zone story in color, so it was a treat to see the second tale (“Cold Calculation”) in traditional black and white. My favorite story in the collection, credit goes to Edu Menna’s art and Sandra Molina’s greytones. From the use of shadow to details like beads of sweat dotting the spaceship crew’s foreheads, the images really played up this tense sci-fi tale.

And that leaves the final story, “It’s All In How You Frame It”. While it had a strong start, I had already guessed the twist when the fantasy device was shown.

In hindsight I wish all 48 pages had been devoted to one rich, nuanced story, rather than being cut into thirds. I can see Rahner’s wit and talent, but compressing each tale didn’t leave a lot of breathing room and I felt the plot twists and reveals were underwhelming. Furthermore, while I appreciated the takes on modern issues, like the War on Terror and environmentalism, I found the messages in each tale sort of preachy. The original television series was known for its challenging and cerebral content, but a half hour program leaves more room for subtlety. At little more than a dozen or so pages each, the social commentary here can come off clumsy. Even though I am ideologically aligned with the political messages being pushed I found them heavy handed.

Review 3 (out of 7) – Worthwhile for die hard Twilight Zone fans and twist ending enthusiasts. But at $7.99 I would leave these tales lost.