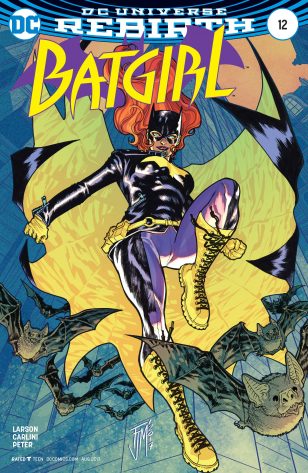 It’s nice to read a superhero comic that stands on its own, isn’t part of some multi-part event, and even has some fun thought bubbles. Batgirl #12 is that comic on the surface, but the issues comes across like a filler episode of Supernatural or X-Files with the added bonus of Barbara Gordon’s enthusiasm and erudition. It deals with the important issue of women in STEM fields being harassed and having their work stolen by male colleagues, but does in a cheesier than cheesy way by having a brilliant physicist named Liana Soto “haunt” a pool after her supposed mentor steals her teleportation research and uses it against her.

Hope Larson, Eleonora Carlini, and Cris Peter give Batgirl #12 a pretty fun start when Batgirl agrees to guest star on Kayla R’s paranormal themed webseries , who has the cloying personality of a “YouTube celebrity”. Their awkward interactions and the horrified faces of the parents and senior citizens, who are taking classes at the Burnside Y pool are pretty hilarious although Carlini’s pencils have a darker edge, and the red that Peter uses for the apparition is a bit creepy. The fun level increases when Batgirl works with her friend Qadir and his crush, chemistry student Analyn, to find out if anything in the pool’s physical makeup is making it like an episode of Real Ghostbusters. Larson writes cutesy romance pretty well, but the literal sparks (drawn by Carlini) have to wait for another day as the rest of the issue is in procedural/wrap up the mystery mode.

There aren’t many twists and turns with Larson telegraphing her plotline and how she is going to resolve it around the midpoint of Batgirl #12. However, Batgirl’s brilliant mind, slight sassiness, and ability to make connections makes the process of solving a pretty thinly crafted mystery entertaining. Carlini and Peter use low lighting in the library to make it seem like she is burning the midnight oil as well as highlighting how creepy Liana’s boss, Dr. Radden is. (He doesn’t appear in the issue in person.) The comic looks and seems cool and deals with real world problems, but there is no bite (or even campiness) to the ghost scenes. I did enjoy Carlini showing Liana go from a molecules to a  skeleton and then a flesh and blood human being. She can do cute (Kayla R’s skull swimsuit) and creepy (See the last sentence.) equally well, which makes her a good fit for a book that presumably happens on the brighter side of Gotham.

In its dialogue and in Batgirl’s thought bubbles, Hope Larson makes the Bat of Burnside sparkle while still having time to make sarcastic comments about tacky ghost shows. She uses her mind more than her fists in this issue and spends more time in the library than swinging from rooftops, which Eleonora Carlini and Cris Peter make look just as intense as yet another fist fight with Kite Man. (Face it, interdisciplinary research about creepy people is stressful.) However, divorced of its fun superhero/detective elements, the plot feels like a late night rerun of an average episode of your favorite supernatural guilty pleasure.

Verdict: 5 (out of 7)– Hope Larson continues to write Batgirl  with personality and heart, but for the most part, Batgirl #12 reads like an average “monster of the week” episode of a TV show like X-Files or Supernatural.