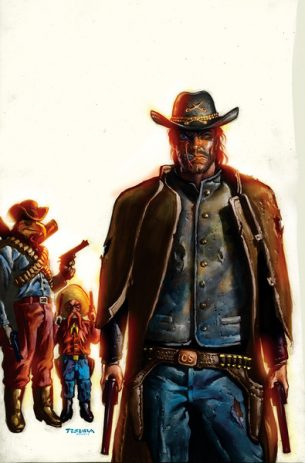 Along with Marvin the Martian and the Martian Manhunter, the pairing of Jonah Hex and Yosemite Sam makes the most logical sense out of any of the DC Comics/Looney Tunes crossovers. Jimmy Palmiotti (who had a run on Jonah Hex in the 2000s) and Mark Teixeira (who cut his artist teeth on Hex in the 1980s) team up to tell a jam packed Western yarn featuring lots of gunfire, a beheaded corpse, Yosemite Sam’s over-the-top Southern accent, and of course, some gorgeous wood paneling in the saloon where Hex and Sam first meet. Foghorn Leghorn also makes an appearance as a prize fighter, who works for a circus, and Palmiotti and Teixeira get a little dark with the affable rooster having him almost peck his opponents to death.

Jonah Hex/Yosemite Sam #1 definitely is more of a spaghetti western than one of the squeaky clean American ones starring John Wayne lookalikes. It’s set in a literally cutthroat capitalist world that is established on the first page when Yosemite Sam’s partners decide to try to gun him down instead of accepting a 10% stake in a what is probably a very profitable gold mine. His quick fire pistols stay otherwise and watching the little guy obliterate his enemies third act of a Quentin Tarantino movie style immediately makes him endearing. Sam’s flamboyant, belongs in a Saturday morning cartoon and not Unforgiven, style of speaking and shooting creates a kind of “yin yang” deal between them. Jonah does the killing and steely stare-downs while Sam does the talking and uses six bullets where one will do.

Even though some of his faces in the early going aren’t the most expressive, Mark Teixeira goes full John Ford-meets-Sergio Leone-meets Tarantino in Hateful Eight in his approach to the gorgeous scenery that fills out his panels. Did I mention the wonderful woodwork in the saloon and Yosemite Sam’s cabin? Colorist Paul Mounts uses plenty of red around Hex to create a feeling of foreboding and sadness around him to go with the vultures that wing in the background when he’s introduced. When violence happens, Teixeira and Mounts sometimes draw the scenes in silhouette to make it more powerful like Tarantino did in Kill Bill to keep the R rating. However, they don’t shy away from close-ups, especially of Sam’s mean mug and even meaner pistols that he still brandishes to defend the wounded Foghorn Leghorn even though he’s out of bullets. This is one of many “classic” Western feeling sequences in Jonah Hex/Yosemite Sam, and it made yearn for a revival of All-Star Western or hell, anything with guns, horses, dust, and moral grey areas.

In contrast with the spaghetti western shoot ‘em up tone of the main story, the backup in Jonah Hex/Yosemite Sam is cute as the little bunny rabbit that Sam hunts at the beginning of the comic. This is probably sacrilege, but Dave Alvarez’s art style looks a lot like the clean animation of classic Disney cartoons without the whole “evil people are ugly” stereotype that they would have probably been applied to the very helpful and competent Jonah Hex. Bill Matheny and Alvarez’s story is a wonderful homage to all things cartoon violence and helps the DC/Looney Tunes crossover go out with a suitably anarchic and hilarious bang.

Verdict: 7 (out of 7)– Jonah Hex/Yosemite Sam #1 is a violent, darkly humorous take on the two gunslingers and has a devilish energy to go with the gorgeous scenery from Mark Teixeira and Paul Mounts