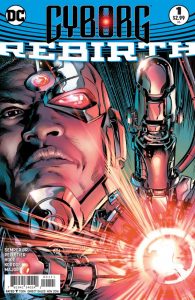 Cyborg Rebirth retells the titular character’s origin story from star athlete, Victor Stone, to S.T.A.R. Labs security guard, Cyborg, as it intercuts with him fighting a giant, and rather cool looking, nano-tech monstrosity by the name of Malware. This time however they throw his mother into the pre-metal origin stew. It’s not all daddy-issues this time around. With the addition of his mother and the circumstances around her, Mr. Semper does a great job in making Papa Stone more than just a cold scientist with no time for his son. Now he’s a slightly warmer scientist with no time for his son, but for a good reason.

While we’re seeing a flashback from the time Silias Stone met Elinore to Cyborg’s conception…the second one that is…the metal one, we’re witnessing a fight between Cyborg and Malware from the city streets to the deep interior of S.T.A.R. Labs. Throughout the fight there are captions from a mysterious villain (revealed at the end as is done) who’s been studying Cyborg.

The most interesting part of the comic is what Cyborg finds during the last minutes of his victorious battle: a recording by Silias Stone stating that he’s unsure if Cyborg is actually his son pre-metaling–I need a better word for his…Cyborganing, or if he’s merely a shell that replicated his son. Has he “saved a man, or created Frankenstein’s monster?” This aspect of Cyborg’s father, and now Cyborg himself, questioning his existence really has this reviewbot intrigued for the coming series.

Now, this is a Rebirth book (yes…they are STILL coming out) which means– nothing really, since each books has tackled what a Rebirth is supposed to be differently. This issue however does an excellent job of laying the groundwork for the series to come while also giving you Cyborg’s origin. No prior experience with the character required. 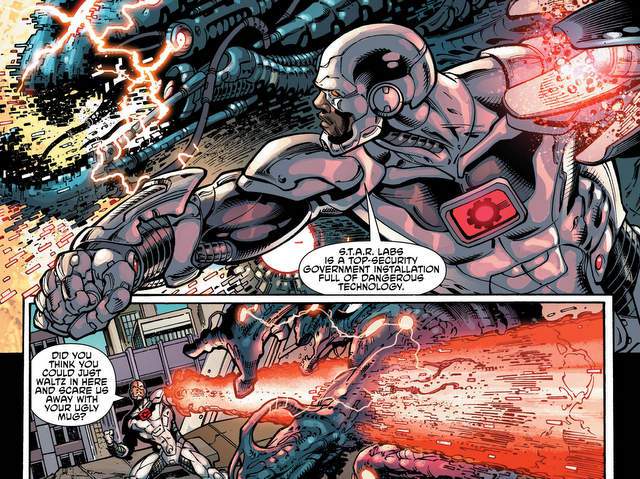 Pelletier’s art was really quite good. Has a clean, classic feel to it. It’s actually quite hard to comment on it since it just works so well. One bit that stood out was how whenever Malware took damage or moved quickly, he digitized somewhat. Had a really neat look to it. Coloring was good. Lettering was good. The comic was…good. That’s about what can be said of it. It’s a well made origin story with a nice looking fight. Not amazing, but certainly not the least bit bad. It does have me looking forward to the proper issue #1.

Rating: 4 (out of 7) A decent comic that sets the stage for better ones to come.