I’ll preface this by saying I do not like conventions. At all. This also happened to be the first time I’ve been to one in five years. If you like reading about lines, crowds, and disappointment, this is for you.

A letterer friend of mine was having some trouble getting approved for a professional badge so I thought for the hell of it I’d see if I still qualified for one. I did. I got my badge. I was going to NYCC. Crap.

I also decided since I was going, that I might as well do some Marvel sample pages and see about getting a portfolio review.

The 7 train pulled into the new station at 34th-Hudson Yard at around 10am. There were only two other people in my train car. We exited and were directed by green-shirted NYCC staff to travel along a plant-lined path rather than the street. Someone mentioned that it felt like being herded into a trap. I couldn’t help but agree. At the Javits Center itself were a mass of people who I believe were waiting to pick up their tickets. (See below.) For those already with badges there was a huge long line to get it, which I somehow accidentally skipped entirely. 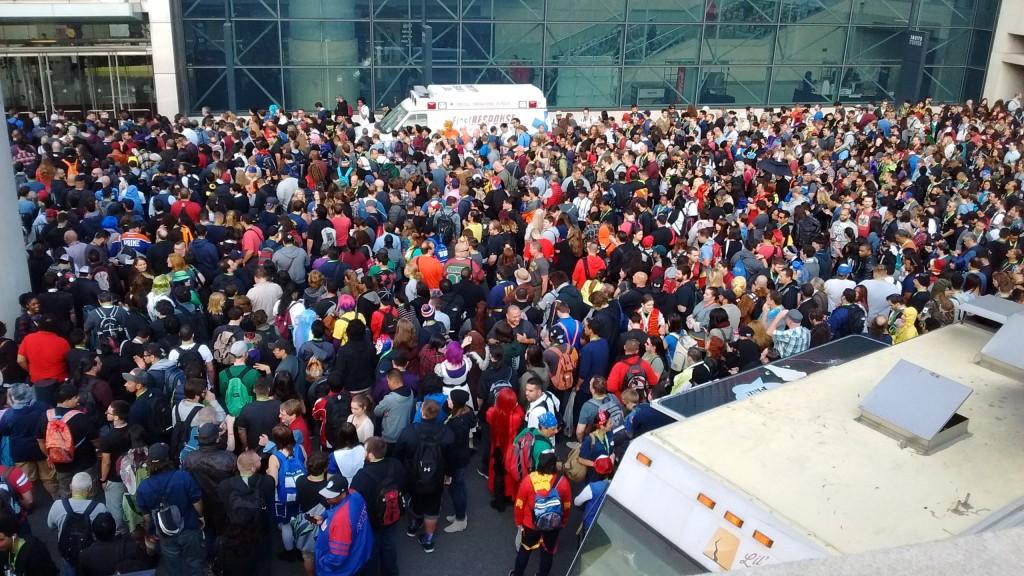 Once inside, I spent almost an hour trying to find where the Breaking Into Comics the Marvel Way panel would be held. Eventually found, I decided to attend the previous panel in that room which was Hip Hop and Comics. The panelists included Chali 2na (Jurassic 5), Eric Orr (creator of Rappin’ Max Robot, the first-ever Hip-Hop comic book, graffiti and fine artist, graphic designer), Adam Wallenta (co-creator of the Public Enemy comic book, MC, songwriter, illustrator), Ronald Wimberly (designer, illustrator, writer), Likwuid Stylez (MC, songwriter, producer), and Johnny “Juice” Rosado (DJ and turntablist), with Patrick A. Reed (editor of Depth Of Field Magazine) as the moderator.

It was actually quite enjoyable, and I experienced a minor geek out seeing Chali 2na, with Jurrassic 5 being the last time I enjoyed hip hop.

Next up was the Breaking into Comics the Marvel Way with C.B. Cebulski (talent scout), Robbi Rodriguez (Spider-Gwen), Robbi Rodriguez’s fabulously bright pink hair (unknown credits), Kris Anka (Uncanny X-Men), and Mark Brooks (cover artist). I was surprised how open they were about nepotism in comics. It really is about who you know.

The majority of the audience questions were from writers and editors. Tips for you writers: Get comics made and then send them to the editor who fits your style/tone the best.

I handed in my pages directly to Mr. Cebulski after the panel and again at the Marvel booth in the hopes of getting a portfolio review. Had to return the following day to see if I made it. Ugh, this wasn’t going to be a one day affair.

On day two I went about an hour later. My train car had a couple more people than the previous day. I was pleasantly surprised to find it was quick and easy to get inside this time. I guess showing up a little after it opened made all the difference. Made my way to the Marvel booth. Was not on the list. Resubmitted with some new stuff and was told to come back the next day to check. I had to come here three days in a row?! They’re killing me.

I then headed to the reunion panel for the animated Justice League TV show. Or I should say the room it was being held in. Sat through an hour of a Felicia Day Q&A first in order to get a decent seat. She was charming and funny but having not watched anything she’d done other than Dr. Horrible, the panel did nothing for me as question after question continually spoiled shows I might have maybe wanted possibly to at some point potentially watch.

I should also mention I was with NOTR’s fearless leader, Earl, who is the biggest DCU Animated Fan in existence. It’s been a few years so was nice to see him again in person.

After the Felicia Day panel ended we were able to move up and center a bit more for better seats. Spent 15 min watching rabid fans grasp at free t-shirts being thrown towards the audience by an MC, and then the panel began. 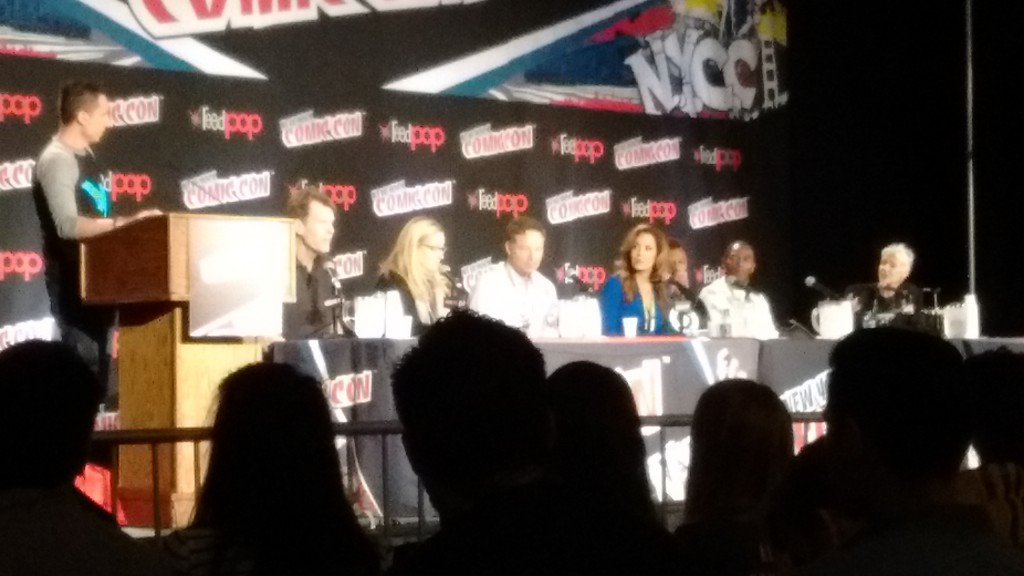 The entire League (excluding Michael Rosenbaum/Flash) along with Andrea Romano (voice director) were there. For the table read of the scripts they performed (the formation of the team in the first episode, and a scene from the final ep of JLU) the moderator (I’m sorry but I forgot his name) removed a Nightwing shirt to reveal a Flash one and did those parts. Interestingly he asked everyone questions aside from George Newbern (Superman). Maybe the mod was still sore about him replacing Tim Daly.

I then decided to check out Artist Alley which has a long corridor connecting it with the main floor. While you have to walk slowly due to crowds everywhere, that corridor was particularly bad. I got about a quarter of the way through before giving up. It was like moving through molasses. (Earl had more resolve and made it in. Took him 20 min to make it out.) The other panels I wanted to see were hours away and it was hard not to trip over folks sprawled out among the floor. I had to return the next day so decided to head home instead. 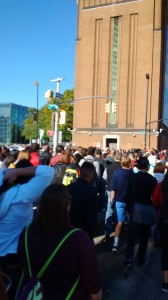 The train didn’t empty at Times Square as it normally did. Instead more people got on. It was practically rush hour levels. Compared to the previous days of my car being almost empty, this was a foreboding sign.

Way more cosplayers and for some reason many folks dragging large suitcases littered the streets. We were diverted the long way around in order to limit traffic. What is normally a five minute walk from the subway station to the con took, I want to say 20 min. Traffic lights meant nothing. The staff kept us back letting the line build so that cars could get through. The crowd became a gigantic organism that would absorb anything it touched. I swear it ate a taxi.

FINALLY I made it inside and headed to the Marvel booth. Oddly enough the path to the booth was clearer than the previous days. I was not on the list yet again. Was told someone else had another list and was given his name. But no one on staff knew who he was or if they did where he was. Passed a happy looking Dan Slott signing comics on my way out as I considered going to some panel or other to wait and see if this mysterious list-master would show. Then I passed a men’s restroom. A twenty person lineup outside. Nope. That was it. I was out of there.

I expect Earl will have a much more favorable write-up later on.