If you were like me, and you glanced the New York Comic Con panel list for 2015, you’d walk away disappointed that neither DC Comics nor Marvel thought it was in their best interest to host movie panels this year. It isn’t a new thing for either company, but I imagined with Batman V Superman: Dawn of Justice out in just over 5 months this would be a good place to start a marketing swell.

And I’ll be honest with you, I had a whole editorial pre-planned about how it was a wasted opportunity. Luckily for me, DC Comics seems to be a slightly smarter company than I thought. While there won’t be (as of now anyhow) a proper Batman v Superman: Dawn of Justice panel at the show, the movie has more than made it’s impact on show-goers. With DC’s “LexCorp” viral campaign.

Being up front with all of you, Warner’s viral campaign for their comic book movies have been some of the smartest, most efficient and fun marketing campaigns I’ve witnessed for a movie. Nearly a decade later (yeah, it’s getting there), the entire campaign for The Dark Knight is still something fondly remembered by fans. While The Dark Knight Rises and Man of Steel had similar campaigns, neither really had the wow factor that the original pulled off.

While it’s too early to say for sure how the LexCorp campaign will play out, it has had a fabulous start.

It began earlier this week when Fortune Magazine ran an interview with Alexander Luthor Jr. in which he spoke about taking over his father’s company and the role he has played in making it a major player in the world. In addition to his interview, Mr. Luthor also joined Twitter where he has started to reach out to his fans.

Shortly after this, Mr. Luthor started making big moves that would affect all attendees at NYCC when it was announced that LexCorp would be providing free Wi-Fi for the entirety of the convention. Now just to put this into perspective, gaining reliable Wi-Fi at the Javits Center for the duration of Comic Con would run you roughly 30 bucks. Lex Luthor has just saved us all $30, we may be able to buy half of a meal now! 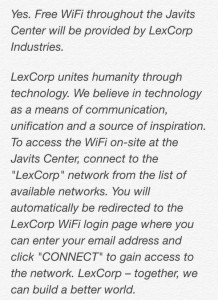 But offering free Wi-Fi is only really important if the Wi-Fi works. And based solely on first day usage, it has been a miracle working. Granted, Thursdays traditionally tends to be NYCC’s lightest day so we’ll see what the rest of the weekend brings, but the Wi-Fi held up well throughout the building and even extended slightly outside the convention center, but not a huge radius beyond it.

Even after this announcement though, LexCorp wasn’t done as they dropped this video at the very start of NYCC announcing Lex/OS and that we’ll be hearing more about it in the upcoming weeks.

The announcement was fun, but really for everyone. So as a final piece of thank you to the fans attending NYCC and who checked out the LexCorp booth, we were given a LexCorp branded portable cell phone charger! 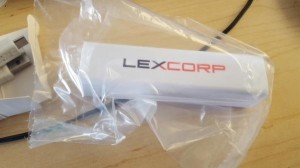 Well you weren’t really “given” one, I went to the booth twice just to check it out and get a spare one for a friend. The first time I went, I was informed we all had to say something that we loved about Mr. Luthor. A group of about 4 of us had to come up with reasons while Lex Luthor was a great man. The second time I went, LexCorp employees told us that the company had recent image problems and were giving these out as good will gestures.

I’m sure there were other reasons involved, but I like that they are making these little freebies into a mini-meta story of Lex Luthor. And I really can’t wait to see what the rest of the weekend holds for him and his company.

So while I’m still disappointed that DC doesn’t have a proper BvS panel, I think this bit of viral marketing is turning out to be fun for show-goers. At least, this one has been enjoying it.