Agents of S.H.I.E.L.D marks the latest endeavor in the Marvel Cinematic Univere, and the first to put on the small screen. Focusing on the character of Agent Phil Coulson, and SHIELD (Strategic Homeland Intervention, Enforcement and Logistics Division) and the new world in the wake of the alien invasion that occurred during The Avengers.

While characters from the film make an appearance like Cobie Smulder’s Maria Hill, the majority of the cast is compromised of all-new agents, who we get to meet during the pilot. And I feel there was a bit too much to cram into this episode. We are re-introduced to Agent Coulson, after his apparent death in the Avengers, and his team. Which consists of 4 new agents to the viewers. AgentÂ Melinda May, who is the driving and weapons expert.Â Grant Ward, the tough and lone wolf field operative who specializes in black ops affairs. AgentsÂ Leo Fitz andÂ Jemma Simmons, the scientific brains of the team with their own specializations and quirks. And finally Skye, who won’t mention much about since the first episode revolves around her.

The problem is, at least with the pilot, aside from Skye, we are introduced to all of these characters and they aren’t given more than their one-professional asset to develop. Granted, this is a TV show and their personality and quirks will evolve and develop over the cost of the series, but as for gaining interest in any of them, I felt the pilot failed in that regard. 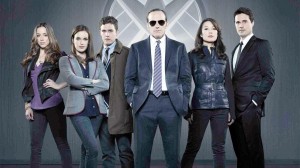 I also felt that the characters weren’t helped by the writing. Don’t get me wrong, the writing was quick and clever and fun at times, but it didn’t really help the characters. Especially if everyone is spouting out random one-liners and quick exchanges. Once more, I’m sure balance will come once the actors and writers find everyone’s voice.

The action, as expected is no where near as large in scope or budget as its movies counterpart, but pretty fun for TV. We get some decent special effects, and some of the genuine most tense and intriguing moments of the pilot during the action setpieces. If nothing else, the show was keen enough to invest us into the “Monster of the Week” (For lack of a better term at the moment) subplot. I felt for the father and his struggle to provide for his son and keep his identity secret.

If the show can continue to show that type of heart, and story-telling, I think we’re in for a solid first season.

Giving a score to a pilot is a silly idea. It’s only the first peek at a much larger world, and while I have my problems with it, I do think Agents of SHIELD has a ton of potential. I will be checking out future episodes to see if they iron out these problems. But for now, I’d recommend it as a fun addition to the Marvel Cinematic Universe.