Top 7 Uses of Music in the Marvel Cinematic Universe

Our Avengers: Age of Ultron countdown continues this week with a look at the best uses of songs in the Marvel Cinematic Universe. These are my seven favorite moments when the directors and editors employed specific songs to empower key scenes with the right audio companions.

In case you need a refresher: With Phase Two of Marvel’s Cinematic Universe wrapping up with this summer’s Avengers: Age of Ultron and Ant-Man, we decided it was a good time to take a look back at some of the best moments Marvel Studios has brought to the silver screen thusfar. Between now and Age of Ultron’s release we’ll be counting down several Top 7 lists that celebrate many of the greatest moments from the MCU so far. For reference, this includes every movie released to date (Iron Man, The Incredible Hulk, Iron Man 2, Thor, Captain America: The First Avenger, The Avengers, Iron Man 3, Thor: The Dark World, Captain America: The Winter Soldier, and Guardians of the Galaxy), as well as all the straight-to-video Marvel One-Shots (“The Consultant”, “A Funny Thing Happened on the Way to Thor’s Hammer”, “Item 47″, “Agent Carter”, and “All Hail the King”), and also Marvel’s ongoing foray into television (Agents of SHIELD up to the mid-season break in Season 2, Agent Carter through 4 episodes, and before Daredevil has aired). Finally, this should go without saying, but: SPOILERS AHEAD!

7) Marvin Gaye’s Trouble Man in Captain America: The Winter Soldier
We begin with the closing scene in our last MCU movie to star an Avenger. The scene of Captain America waking up in the hospital while Sam Wilson waited and played Trouble Man, the iconic Marvin Gaye album Sam recommended to Steve in the film’s opening running scene. It was a great callback to one of the jam-packed movie’s signature moments and successfully reset the intense tone of the climactic action sequence back to Marvel’s usual light-hearted, heroes-are-fun vibe.

6) The Dance Off in Guardians of the Galaxy
Okay, sure, it was a little bit ridiculous that the film’s iron-fisted big bad, Ronan, was thwarted by an improvised a capella dance performance by that guy from Parks and Rec. But Guardians had by that point already earned the ability to infuse plot-turning events with heavy strokes of comedy, so despite its inherent wonkiness the scene–featuring The Five Stairstep’s “O-o-h Child”–was actually pulled off pretty well. Gamora’s embarrassed refusal to join Star-Lord’s boogie and Ronan’s incredulous anger really topped it off.

5) Awesome Mix Vol. 2 in Guardians of the Galaxy
Guardians’ soundtrack has been justifiably praised for being an excellent collection of  80s hits that blended nicely with the film’s rompy mix of both situational and referential comedy with sci-fi action set pieces. While Peter Quill’s Awesome Mix Vol. 1 formed the backbone of the soundtrack (on top of being his one emotional connection to Earth), it was his discovery of Awesome Mix Vol. 2 in the cathartic scene during which he finally opened his mother’s dying gift that earns a spot on this list. It was a great, emotionally-satisfying close to one of the movie’s heavier plot threads, and Marvin Gaye and Tammi Terrell’s uplifting duet “Ain’t No Mountain High Enough” was a great choice for the scene. 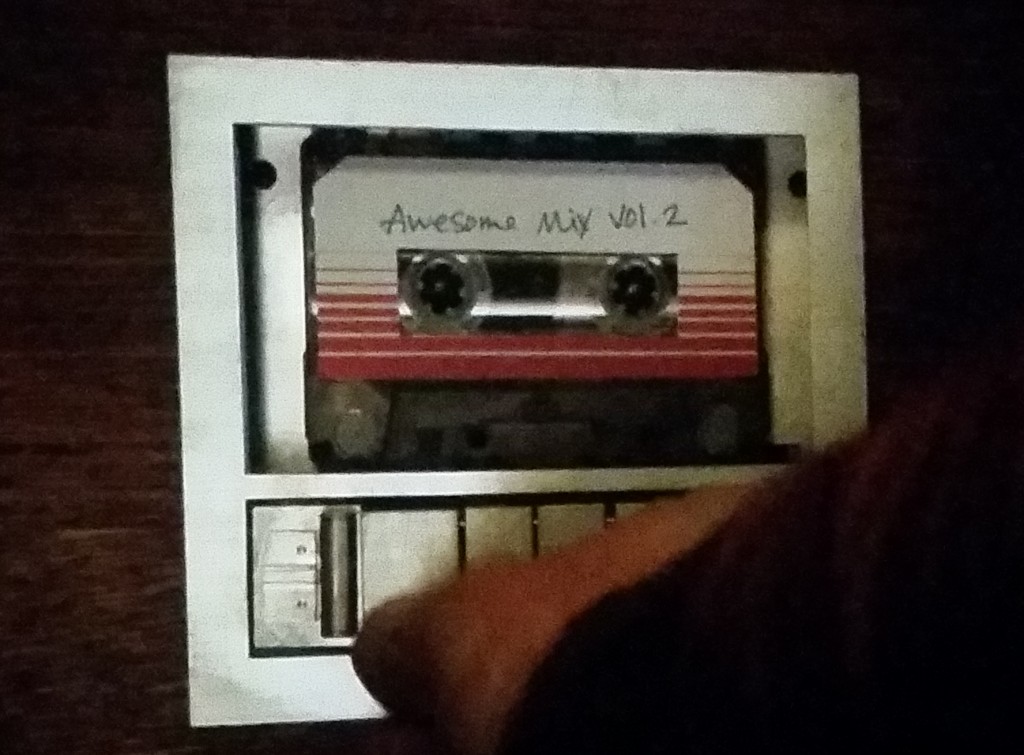 4) The Credits Sequence in Iron Man 3
This is kind of a weird one because it comes out of nowhere and doesn’t actually tie directly into the movie; it’s more like a wrap-up that celebrates the Iron Man‘s entire trilogy of solo adventures. However, the cool factor of this sequence is undeniable, cutting together numerous key scenes from the three movies using a visually striking, comic book-esque set of animated panels. The element that really pulls the montage together is Brian Tyler’s masterful, upbeat “Can You Dig It?” track that pulsates with the kind of excitement level that just makes you wanna stand up and shout, “YEAH!! SUPER HEROES ROCK!!” …or maybe that was just me, whatever.

3) Iron Man’s entrance into Cap and Loki’s fight in The Avengers
Iron Man has a history of success with classic rock songs–not only the obvious in Black Sabbath’s eponymous song about the character, but even throughout his movie franchise. No song stands out more than AC/DC’s “Shoot to Thrill” played during Iron Man’s dramatic entrance in The Avengers. Despite air support from Black Widow in a Quinjet, Cap initially struggles in his fight against Loki. Just as Widow starts to get worried, however, Tony Stark enters the scene in a way only Tony Stark could: remotely overriding the Quinjet’s computer system to blast “Shoot to Thrill” over the PA at the super-foes brawling below. And then, just to put a cherry on top of the whole thing, Iron Man closes out the scene by–you guessed it!–shooting Loki in a thrilling burst onto the scene, which prompts the God of Mischief’s immediate surrender. Talk about an entrance!

2) The Title Sequence in Guardians of the Galaxy
If you only watched the very first two scenes in Guardians of the Galaxy, you might think the movie was a depressing, decrepit sci-fi movie (with awesome holograph technology). Once Star-Lord actually steps into that temple and we see Chris Pratt unmasked for the first time, however, the movie brazenly shows off the fun and humor that forms it’s heartbeat. Title wonderful title sequence–featuring “Come and Get Your Love” by Redbone–is a great, light-hearted setup to the film’s protagonist and main MacGuffin. Previously-distraught Peter has grown into a rambunctious, dancing version of Indiana Jones with cool rocket boots. Better yet, Peter’s hilarious dance routine is fueled by his signature, genuine Sony Walkman.

1) Dancing Baby Groot in Guardians of the Galaxy
Alright, so clearly James Gunn was really clever with his utilization of classic tunes in Guardians. No scene was more memorable, however, than that mid-credits long shot of Baby Groot dancing to the Jackson 5’s “I Want You Back” while Drax cleans his blade in the background. It was a heart-warming finishing touch on a spectacular franchise debut, simultaneously hitting the multiple tones the movie had utilized previously: it was funny, it played on the heavier emotional beats from the climax, and it was a visual spectacle in Groot’s CG execution as well as the perspective trick with Drax. The song was the perfect match to capture that complex convergence of emotions it was going for.