7. Hereafter – The Death of Superman!

Naw, we’re just kidding. Sure it’s kind of a bait and switch, though to be fair episode isn’t titled the Death of Superman, but the creators found a creative way to tackle the Big Man’s absence and “resurrection” in this two-part. Not only that, but it was fun to revisit Vandal Savage (the villain from the season one finale) because ultimately what does happen to a mastermind when he gets his wish, but is immortal? 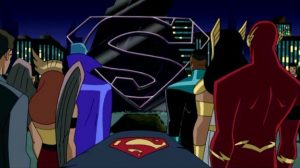 6. Fury – Most people exist just off the center on either side, but what happens when you take your ideology to its natural extreme? That’s what happens when Aresia, a rogue Amazon, takes their lesson of female inclusion to its logical extreme and attempts to wipe out the other half. It’s a fun episode to see the League deal with a team of equals, but also to see Wonder Woman confronted with the shortcomings of her upbringings. 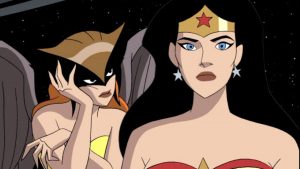 5. Wild Cards – The Joker’s wild, its as true in comics as it is in cards, and we get a fun marriage of the two in this episode as The Joker goes Vegas! The Royal Flush Gang on their own aren’t that interesting of a group, but paired with The Joker and an element of reality TV makes for a compelling watch. Then there is twist upon twist before our grand climax, and just when you think it’s over fans are hit with a moment 2 seasons in the making! 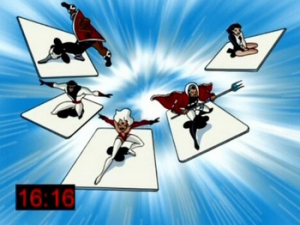 4. Secret Society – The Justice League does 3 different variations of the League of Doom/Injustice Society in its first two seasons. A thing that isn’t lost on the writers nor the members of the team in this episode. But where those attacked the League head-on, the Secret Society took the time to examine what makes the characters work together, and truthfully it was a strained understanding of good. We like that it shows heroes have their flaws, but put those aside for the greater good. The fight at the football stadium also doesn’t hurt. 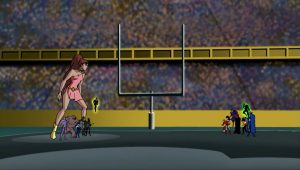 The season/series finale of Justice League had it all, and handled it almost flawlessly. From the discovery of Hawkgirl’s double agents status to the Justice League’s secret identity exposed to Batman launching the Watchtower out of orbit and into a battlestation, the 3-part finale gives everyone a chance to shine, and leaves the viewers emotional drained by the end. 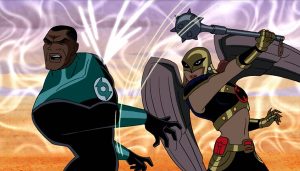 2. Twilight – Justice League season 1 had some rough patches, and the team seem hellbent on proving they had found their footing with the season premiere and they knock it out of the park. Most shows wouldn’t start the season with perhaps one of the biggest bads in their entire line-up, but here we are. An epic battle ensues between Superman and Darkseid. Batman and Wonder Woman have a fun and enlightening run-in with the New Gods, and Brainiac is around creating his own havoc. 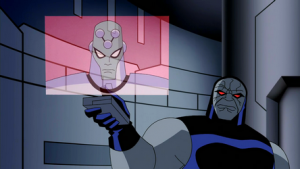 1. A Better World – Is it easy to peg the most important episode of an entire series? There can be some debate, but for our money, A Better World is THE most important episode of Justice League as it would go on to form the backbone for almost 2 seasons of Justice League Unlimited plots. But being important doesn’t necessarily make it good, what does is the focus on characters, both good and not even but corrupted by good. We get amazing interactions with Batman, Superman, The Flash, Green Lantern, Hawkgirl and even some villains. The alternate design for the characters is also fun to see.