I’ve made it no secret that without their animated series, I wouldn’t be into comic books. I was born into a golden age when Batman, Spider-Man, Superman, the X-Men, Iron Man, the Fantastic Four, and many other graced the small screen on an almost daily basis.

As some series continued to grow, expand, and evolve, I would follow them. None went as long, as wide, or as deep, as the Timmverse, spanning fourteen years from Batman: The Animated Series to Justice League/Unlimited. Since the years of those series, I’ve tried to make it a point to see Kevin Conroy whenever he showed up at New York Comic Con or even independent comic shows in the city. It was fun and novel because he was The Batman. 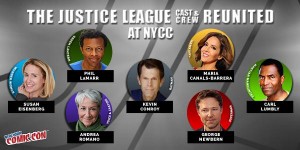 The panel started with the members of the League being introduced and it included the Big 6: Kevin Conroy as Batman, George Newbern as Superman, Susan Einsenberg as Wonder Woman, Phil LaMarr as Green Lantern, Maria Canals-Barrera, Carl Lumbly as Martian Manhunter and the woman behind all the talent, Andrea Romano. After the intros and the crowd going crazy, the cast members took their seat and we were straight into some questions from the panel’s moderator, Sean Lynch.

Questions ranged from the romance that budded on the show between Wonder Woman and Batman, how Lumbly found his voice for the Manhunter in his own background and upbringing, how they felt about getting the role, the pressure and stress Andrea felt in casting such iconic roles and much more. The questions were fine and the cast handled them well, but for the fan in me the stuff that was important and cool was what followed.

As part of the presentation, the cast table-read select scenes from the animated series. The first scene came from the pilot episode and the formation of the Justice League. It was…as they said, like riding a bike. I was transported back into time as I listened to the first episode from over a decade ago. No one missed a beat, and sounded like they bought their A-game. They even threw in some special effects to really spice up the read. My only complaint is not all members of the League got to shine in their first outing, and while Lynch stood in for the Flash, there was no matching Rosenbaum’s performance and he does get a lot in the initial exchange.

The next scene up, was perhaps an interesting choice since it only featured two members of the League, but it was the opening from the episode, “This Little Piggy” where Batman essentially tries to explain to Wonder Woman why a relationship between the two of them wouldn’t work, and Wonder Woman politely responds by crushing a gargoyle in her hands. The read was topped off by Kevin singing his rendition of “Am I Blue” which Batman sings in the climax of the episode to help save Wonder Woman. Not only did he break into song, but he knew how to work a crowd into a fervor. It was a magical five minutes or so.

To bookend the entire experience, we got a read of the final scene from the Justice League Unlimited episode, “Destroyer,” as the League has seen the “end” of Luthor and Darkseid, and debate what to do with Luthor’s partners in crime. We get a fun exchange between the League and villains and notice a more friendly exchange between the heroes. It was a sweet moment to see, and of course where the title of the panel comes from.

While it would have been great to just have these scenes played out for us, the League had one more surprise in store. Gone were voice actors and sat on the stage were Batman, Superman, Wonder Woman, Green Lantern, Hawkgirl and Martian Manhunter. Batman lamented about having to take time off from fighting crime to come to New York for this “Reunion” while other heroes thanked New York for hosting them. The League discussed possible new members and all sorts of fun things. The exact details weren’t important, it was just magical being able to witness something new after nearly a decade off the air. 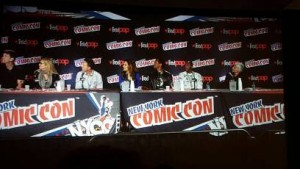 I will say the greatest thing the panel accomplished was getting me to want to re-watch the series once more even though just finished a re-watch of the entire series this past July. But now, I’d approach it with fresh ears and eyes after such a wonderful panel. I can honestly say in my 7 years of attending New York Comic Con, this was easily my favorite and most memorable event, and there has been dozens of great ones. Hopefully, it’s not too long for the League to reunite because the world can always use more heroes.