Justice League vs Suicide Squad doesn’t feature a ton of action, but the strength of these characters is more than enough to carry this issue to the finish line. 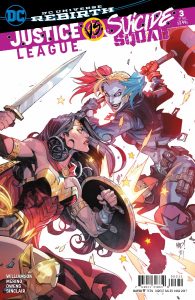 The real gem of the book is the conversation between the various members of the Squad and the detained members of the Justice League. There’s a humorous exchange between The Flash and Captain Boomerang. We get some barbs and rightful anger between others, but really the heart of the issue is the exchange Superman and Killer Frost.

We’re often told that Superman is an inspiration, that he inspires hope, but we don’t often get to see it. Especially since the birth of the New 52, but not only do we get to see how Superman inspired a younger Caitlin. It is a genuinely sweet moment when you forget she is a “villain.” And the best part is that it isn’t Superman talking to her to lure her into a false-sense of security or manipulate her to set him free. Even when weakened and captive, Superman cares more about the people around him. A true hero.

On the other side of the book, we get one of my favorite dynamics in DC Comics as Amanda Waller and Batman come face to face. While the confrontation isn’t as full as threats and anger, it is always fun to see these two giants face-off.

Like I said, the issue is light on action, but what we do get focuses on Max Lord’s team of villains. We finally get the scope of their powers as we revisit their jail break-out and their search for the ultimate power. It isn’t much, but it does break up the book just enough to keep the steam going. And of course, we get a giant reveal at the end.

The art remains strong with some real striking visuals and gags. My favorite is the introduction of Batman to the issue which seems ripped out of a Hannibal movie. Though I do have to mention, a little goofy that his kneepads are Bat-shaped in the image. There’s branding then there’s Bat-branding. But everything else in the image works. The only guard without his face covered wearing the angriest facial expression. The meeting of the Bat-cowl and his face mask. Batman still exhibiting calm even when strapped down. Just a fun start to a big book.

Review 6 (Out of 7) – Justice League Vs Suicide Squad remains a fun event by keeping the scale small and a focus on the characters more than the battles. It does suffer a bit from uneven art at times.