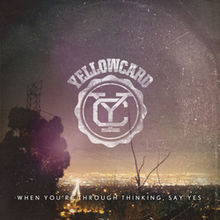 When You’re Through Thinking, Say Yes is the 7th studio album from Yellowcard and was released on March 22, 2011. Many people maybe thinking what an odd long name for an album. I for one am a huge fan of this title i mean its perfect and speaks volumes to me. The album title actually comes from a text message that that lead singer Ryan Key sent to a girl.

Now this is the first Yellowcard album to be released in four years. So you could say for me this album was long over due and I had very high expectations for me when I heard it was due out. There is just something so special about this band, they can take a punk sound and change it and make it their own. This is something I feel is lacking in music these days, I am very tired of the same sound I love bands that can take something and make it their own, or when they change their sound and experiment. They are a punk band that found a way to make their music magical, by adding violin and some amazing lyrics. Â I am a big fan of how it is a short 10 song album, this reason being is that there are no filler songs on this album it is nothing but good well written songs.

The album starts off with a BANG! The first song “The Sounds of You and Me” is a great way to start this album and let the audience know where it is headed. I am in love with the breakdown in this song I love how it just builds up and rocks out. I love this lyric from the songÂ “can we begin finding out before we’re too late lost in between, the truth and the dream i never been more ready to move on”Â Really what is being said is that they are thinking about breaking up and they dont want to let go but are ready for it. There is still hope that it might work (The Dream) but reality is they probably won’t (The Truth). The next song is their first single off the album “For You, and Your Denial” when this song was released my expectations for the album only increased because this song is just so catchy and really a great Yellowcard song! Many of you may normally know that I’m not a big fan of singles because the artist doesn’t pick them and the average fan who may not purchase the album will not dig deeper and find the real gems in the album, but this is the perfect first single to get people back into Yellowcard. There are only a few other songs I want to address, I really could go into more with each song but I just want to point out a few things I love about about couple more songs that need to be addressed. Another song that is kind of an anthem to that first young love you had then you will never forget. “With You Around” I love the tempo of this song and get excited every time i hear it.Â Â “You and me driving with a Saves the Day record on We were singing till our voices were gone And I was falling hard”Â Just a fun youthful chorus. “Hang You Up” is another great slower song, with a pretty cheesy, yet funny music video you all should check out. Another song “Sing For Me” is just a song I could spend forever talking about, I really don’t know why but there is something very special about this song and really between this and the next song I discuss I don’t know if there has been any better songs released yet this year. I can’t post lyrics I enjoy for this song because I would end up just posting the whole song but it really is a good ride that everyone should enjoy. Finally, one amazing end to this album is the song “Be The Young” basically this song is about a relationship that has stood the test of time and about also growing up but still holding on to your youthful experiences. Be young in a mature fun way basically. It really is a great way to wrap up this album! 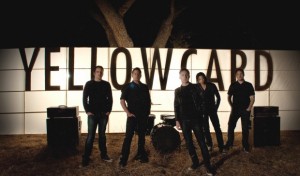 On the set of their video for "Sing For Me"

Yellowcard also released this a studio acoustic version of this album. Normally bands do no do this, they may play some songs acoustic live. It was something they did for their fans as a sort of thank you for supporting them over the years. The acoustic version really shows how well the band is musically. They did an amazing job with the acoustic version and it gives each song a whole new feel. Hearing the songs acoustic makes the album even better depending what kind of mood you are in at the moment. Overall, this album has great flow, amazing lyrics, original Yellowcard sound, and great music.