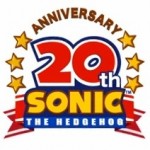 It’s Sonic’s Birthday, and all of his friends decide to throw him a surprise party, complete with cake,Â balloons and chili-dogs. Suddenly, A mysterious, Smoke like monster crashes the party! He opens some portals that somehow starts vacuuming Sonic’s now terrified friends into them. Sonic tries to stop the monster by doing a spindash but gets knocked away like he was nothing. He wakes up in some kind of Limbo/purgatory with a black and white landmark of Green Hill and Tails in the distance. It’s up to Sonic to save his friends! But wait, there’s two Sonics?

That’s pretty much the Story-line to the game.  The smoke monster is revealed to be a Time Eater, and he is causing havoc everywhere (and every-when?) he goes. For me personally, I could care less about the story when it comes to Sonic. I just want the game to be good. Â The game starts you off with Classic Sonic taking on a beautifully redesigned Green Hill Zone, for those not in the know, that’s the first level in Sonic The hedgehog (1991). Classic Sonic does have a Spindash, which is something he didn’t get until Sonic the hedgehog 2, but it works here. 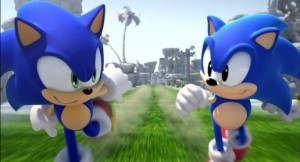 Classic Sonic is classic Sonic. He has the Spindash, he teeters on corners, his game-play is mostly the side scrolling, momentum based platforming, and his physics are perfect. If you’ve ever played the Sega Genesis games, he’s exactly like those. He also doesn’t talk, being mute wouldn’t be such a big deal, except Classic Tails talks. So that’s a little weird. Also, this is how Sonic The Hedgehog 4: ep.I should have been. 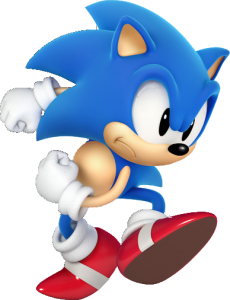 Modern Sonic is kind of a blend between Sonic Rush and Sonic Adventure style. He has a good number of moves. He can slide, Wall jump, Quickstep, has a homing attack,  has a boost meter along with some other skills. His game-play style is all about speed, and quick reactions. He does have some side-scrolling bits but usually the camera is behind him. He does platforming too, but not as much as Classic does. 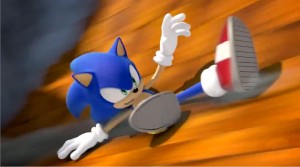 One thing that’s really awesome about this game is all the levels are from past games. Sure, that sounds kind of bad, but trust me, it’s awesome. To have a Fully realized Green Hill or Chemical Plant Zone for Modern Sonic to run through is great! Or, conversely, a City Escape or Seaside Hill Level for Classic to run through, is a treat. The Levels /Zones aren’t carbon copied from the past games either, they’re really different, yet familiar. You also need to keep track of which Sonic you are using. There’s been a few times that I was trying to get Classic to do the homing attack.

There’s a ton of Easter Eggs in this game, the Rival battles are pretty great and fan-servicey, and the boss levels add some unexpected twists to familiar foes. The music used in each act is a nice touch. Each track is a remix of the old level’s music, which you can unlock the original music as well. Within each zone there are many scattered red star rings to collect. Each one of these unlocks something, whether it be art, or music. There are also plenty of challenge rooms that are pretty fun, and some of them also incorporate friends you have saved. After you beat the challenge a bell appears above the door. Hit it, and a musical note comes out, grab that, and you unlock more stuff!

There are 10 challenges to each Level, 5 for each Sonic. It should be mentioned that each level’s challenges actually change the level to be specific to each challenge. For Example, one of the Green Hill Challenges is to bop Giant Motobugs, and Buzzbombers while simultaneously avoiding obstacles and beating your double to the goal. Also there is a Skill shop. Some of the skills are unlocked by defeating challenges, or you can buy them with the points you get for beating the normal zones. Your friends also give you generalized hints and locations of the Red Star Rings when you talk to them in the limbo/purgatory hub world. After you beat normal mode there’s also a Hard mode.

This game does have some minor flaws, however.  The Main Story is only about 4 to 6 hours long, but all the collectibles and the challenge rooms make up for it. There’s not as many Genesis levels as I would like, but, I could play Casino Night for hours. Also there aren’t chaos Emerald Levels. You “earn” them by defeating bosses, and the Rivals.

On my first play through I had some slight camera glitching on Sky Sanctuary. It only happened once, but it was jarring when it did happen. One of the complaints about classic Sonic I have is the Spindash. In the old games you could push down and rev it up bby pressing the jump button, you can do that here too but it doesn’t always rev, and will shoot you forward unexpectedly sometimes. Also as mentioned above, you really have to pay attention to which Sonic you are playing as.

BOTTOM LINE– If you are a Sonic fan at all, from any generation, get this game. It’s a love-letter from Sega to you.