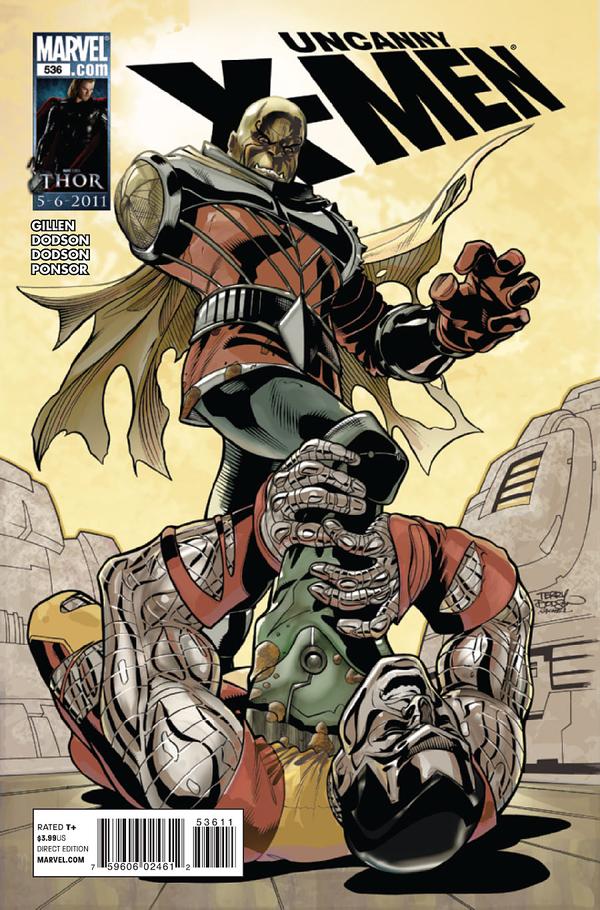 Uncanny X-Men #536 cover by the Dodson's

Uncanny X-Men #536 picks up picks up after issue #535 ended, and sees the aliens from Breakworld taking refuge with the X-Men on Utopia, though not everything is as it seems.

As I’ve said before, Kieron Gillen is fantastic writer when it comes to X-Men (and in general) and he has proved his skills once again this month. Gillen really gets to the heart of these characters and their relationships. And he shows it off with a sense of whether it is a simple conversation between Peter and Kitty or the scenes between Emma, Scott and Magneto, everything seems to click. And best of all, none of the characters seem out of place.

The Dodsons’ artwork, as I’ve said before, is just plain beautiful. The art is really detailed, and the shading and inking work extremely well with the pencils. Another thing that I really like about their art, which goes well with Gillen’s writing, is that the characters are capable of showing real expressions, even in an issue like this where the emotions aren’t running high, like in simple conversations.

The story in this issue was not a letdown, and continues the “Breaking Point” story in a way that compliments the original Joss Whedon story well, although it’s a tad bit predictable, especially with the so called “plot twist” that I’ve expectedÂ  ever since I heard about this story arc. And, come to think of it, the cover actually spoils it too… Anyway, it does end in the typical cliffhanger ending that monthly comics do a lot, but I’m not going to complain about that since it comes with the territory. Needless to say, I’ll be back for next month’s issue.

New Reader Accessibility Rating: 3 As you may have guessed already, this issue of Uncanny picks up from the last one, as well as Joss Whedon and John Cassiday’s Astonishing X-Men run, so obviously new readers will be pretty confused. Now, issue #535 only came out a couple weeks ago, so if you can find that pick both issues up, and you’ll be mostly fine, although if you have the cash, I’d say pick those up, but don’t read them yet and buy the Whedon/Cassaday books first. Trust me, you won’t be disappointed.