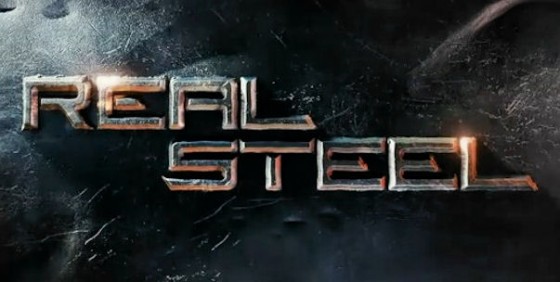 There’s an expression, there are no new stories, just old ones with new words. Real Steel isn’t a new story, actually, it is based on a 1956 short story called “Steel.” But it does add a new wrinkle to the familiar underdog tale with the use of its futuristic setting and combatants. 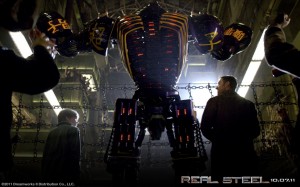 Real Steel stars Hugh Jackman as Charlie Keaton, an out of work, and down on his luck former human boxer. At the start of the movie, we find out that Mr. Keaton is always looking for the next big score as he owes several people thousands of dollars, and enters into a robot boxing match at a state farm to try and earn some quick money. After failing for getting a tad cocky and having his last robot destroyed, he returns to Texas to find out that his former girlfriend has died and left him custody of his son, Max Keaton (played by Dakota Goyo). Charlie wants no part of his son and literally sells his guardianship to Max’s aunt and rich husband. Max’s aunt and uncle (sorry for forgetting their names, but really unmemorable characters) had plans to visit Italy for 2 months so part of the deal is that Charlie takes care of him during that time. And thus the father-son bonding movie begins.

When I first saw the trailer for Real Steel, the idea of Rocky meets Transformers was the first thing that came to mind. The notion of an underdog boxer, who rises through the ranks to become a contender isn’t a new story as I said. The problem is this movie seems to really misplace its heart for setpieces. When we first meet Charlie, its hard to get behind him because he does seem rash and impulsive and looks for a big score rather than being smart about his movements. As the movie progresses forward, very few of those character traits are shredded naturally. I felt that a lot of it just happened because Charlie had to transform by the end of the movie.

One scene in particular that stood out was when Max decided to enter his first robot boxing match, and made a extravagant bet with some dude in a mohawk and ink (the movie has some colorful characters), and Charlie tries to talk some sense into him. I questioned this scene because Charlie had spent the entire movie up until this point always pushing for the biggest possible gamble (and really never paying off for him). At no time during the course of the movie, had I seen a reason nor was the audience given a reason to believe that his behavior/attitude had changed. But here it was on display.

The entire character arc and even romance felt force. There seems to be specific points the movie wants to hit in order to get to the climax, but there isn’t enough time to really flesh it out.

As I mentioned before, there is a romance with LOST’s star Evangeline Lilly, who plays Bailey Tallet, the daughter of the trainer who trained Charlie in actual human boxing, and the current owner of the gym in which Charlie trains and repairs his robots. There are hints of a former love between them, which is never really expanded on. Though much like Charlie’s growth happens because the story dictates that it does. There make-up scene is both cute, but awkward and strange at the same time. And while the romance kind of blossoms, the movie really doesn’t tell you much at the end, but we can figure out what happens. 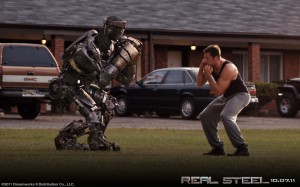 Now the real stars of the movie, are Charlie’s 11 year old son, Max and his robot fighter, Atom. For a child actor, Max does a fairly good job of carrying a lot of the emotional weight of the movie. It is through him, that we really see the most growth and touching moments. He is brash and arrogant like his father, but he is also loyal and believes in people, which makes him a slightly better person. He has some of the better moments in the movie, but he is still limited by being a kid who can overact. The scene when he challenges the big bad of the movie is a tad over-acted and its really just him screaming into a mic, and it got annoying really quick. Other than that misstep, I thought he did a commendable job in the role.

Especially when he shared screen-time with Atom, who for a non-talking robot exhibited a lot of personality. Their relationship kind of started off like father and son with Atom filling in for a role that Charlie just wasn’t primed to step into. But as the movie progresses, they become more like brothers. Kindred spirits looking out for each other. And unlike the rest of the movie, this seems to be a natural progression that takes place as they bond over fights, dancing and training. So when it really pays off in the final fight, you feel like it was earned.

And the robot fighting is some of the cooler action we have seen this year. While they really move and sound like Transformers, they seem a bit more lively since they aren’t as bulky. And each robot tended to have its own personality even if on screen for the shortest amount of time. We had a two-headed robot called Twin Cities, we had Noisy Boy, who was an internationally traveled robot, there’s Zeus the big bad of the movie and of course Atom, the little scraper who could! They all put on some engaging fights, and as the movie hinted at, you get a lot more brutal and even dirty action with robots than you could ever get with humans. Though one scene has a robot low blow, I’m not quite sure how that one worked!

Recommendation: Rent It– I wouldn’t go out of my way to see the movie in theaters, but if you have a weekend to waste or wait for the home release, it is worth checking out. It is a fun little ride, that never quite finds its footing as fair as heart goes.