Dick Grayson is Batman. Damian Wayne is Robin. And it has been that way for 2 years. Oddly, a team that probably shouldn’t have work (let’s be honest, they were taking over for some popular counterparts) has been one of the most fresh and unique duos in comics for some time. Granted, part of it was the skilled and trained hands of Grant Morrison, but now that he is off the books how does it hold up?

Personally, I don’t believe in love at first sight, but upon seeing the first panel of this issue, I already knew I would love it. 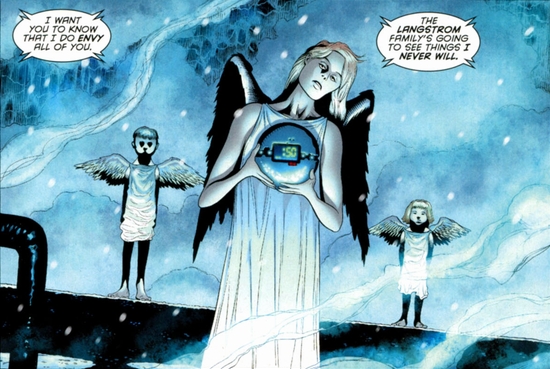 The coloring, the imagery, the artwork just all come together perfectly. And really it sums up the issue, it fires on all cylinders. The writing is solid, and really captures the Dick/Damien/Alfred dynamic. The villain is interesting and really a visual treat, and his motives are interesting. Not to give much away, but he wants to “save” people who have been wronged by the villains community. It is an interesting premise. The only issue I could see is it being a one-trick pony, how do you bring this villain back down the road?

Sometimes, you just have to make an entrance.

The panel above is from another wonderful page that is just full of colors that makes my eyes dance. If nothing else, this was the best looking book, I read all week.

Recommendation: I will say, I was a tad disappointed with the initial post-Morrison arc, but now that this new story has gotten underway, I feel more confident in the creative team. I find the villain unique, both visually and motive wise, and I think the writer nails the Dick and Damian dynamic which for the most part really drives the series for me. All in all, Batman % Robin 21 comes highly recommended by me.

New Reader Accessibility: 7 This issue gets a solid score because you really don’t need to know much about the story behind the two issues (this is part 2 of an arc). I mean most people know who Batman and Robin are, you don’t necessarily need to know WHO is behind the mask nor why they are. It also helps to have an in-built knowledge of Batman foes, but other than that. Its a pretty accessible book, and as I’ve swooned over before the art is wonderful. So check it out!