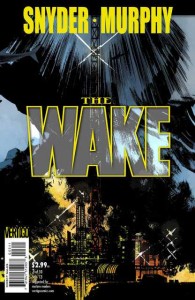 The Wake #3
Written By: Scott Snyder
Art By: Sean Murphy

The Wake is shaping up to be a fantastic horror story that keeps you on the edge of your seat. This story so far has been paced perfectly adding details here and there making the reader question what is really going on. Snyder has done a great job with hinting and keeping the reader engaged while not answering any overall questions as to what is going on.

With issue three we see the crew searching for the monster that has escaped and we learn that it can poison people and cause hallucinations. This aspect is going to make the story very interesting going forward, making the reader question is what is occurring is reality or not. Â Murphy does a fantastic job with the art for Snyder’s style of writing. This book is going to be a horror at its core and the style of the art is creepy. The way we see the monster as a shadow really adds an element to the story that other art might not have offered.

This story going forward is going to cause people to wonder what is real and what isn’t. The reveal at the end might have people wondering what is exactly going on. While unanswered questions could be frustrating, this aspect makes the book that more exciting. I enjoy the story so far and know that it will be way better to read as a whole in trade.

Overall, The Wake #3 is an issue that really advances the plot of the story, while not answering many questions. The detail in the background “stories” adds an exciting element to this world. With a story that keeps you on the edge of your seat, and art that flows from panel to panel, The Wake is going to be talked about for a while. 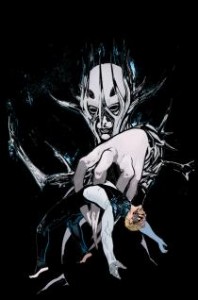 Buddy Baker has taken quite the journey over the past year. Normally with annual issues we can get a stand alone issue that doesn’t really deal with the ongoing story, but with Animal Man Annual #2 we get a story that ties into what Buddy has gone though over the last year. Plus we get an awesome new character in Spider Queen.

I enjoyed how this issue went back to explore the death of Cliff since it is still such a vital point in the current story. We see him dealing with the death of his son, then we flash back to Buddy as Animal Man in costume. Since the new 52 we haven’t gotten two many full issues with Buddy in costume. This issue was exciting in that aspect of seeing Animal Man pre Rot World.

We see Buddy balancing being a superhero and a good father. The issue did a great job showing Buddy in this light since it seems like he was not the best father prior to this point. Seeing him interact with his son makes the pain of Cliff’s death even worse. The Spider Queen feeds off of dreams and is not very different then Buddy. She wants to protect her children just like Buddy does. The way he gets her to stop attacking humans was very interesting and creative.

Overall, Jeff Lemire has done a fantastic job with this character. Animal Man may seem like a D List character but the story has been so emotional and exciting. The art has vastly improved since rot world and added more to the overall story. The ending of this issue could have any reader in tears. A beautiful ending to the book. 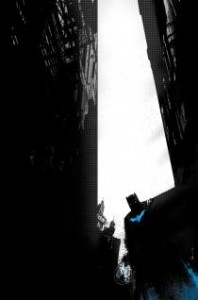 Batman Annual 2 felt a bit out of place with the Zero Year story going on. The issue did do a sort of shout out to the story line but otherwise this story was just sort of a stand alone issue. With what Snyder has done with this series so far this being a stand alone was a disappointment.

The way the story started was actually the best part of the issue. Having Batman lock himself into Arkham to determine if the new security would be able to hold the typical inmates was awesome. We see these villains basically escape and be admitted time and time again. Seeing Batman breakout but trying to think in ways that his foes would was great writing.

The main “villain” had an interesting backstory and motive in the issue but she just didn’t click in this batman universe. It was an interesting moment seeing her get into Bruce’s mind and have a call back of all the pain Batman had suffered over the last year. The only thing being was the art was not what I have come to expect with this series.

Overall, Batman Annual #2 is a good issue if read on its own. The art is lacking without Capullo on this issue, but it isn’t the worst art out there. Seeing Batman trying to keep Arkham safe and limiting the breakouts was interesting and fun. The villain was not a foe worthy of Batman but did have a few shining moments.