Confession time (how have I not used that more often, oh how I liked Metroid: Other M), I honestly didn’t know Generation Lost existed. At first, I heard about Brightest Day, and how it would be a bi-weekly tie-in to Blackest Night and there was some other project with some rejects and Booster Gold. You could tell I was excited for it, ended up making a bet with a friend that he would read all of Generation Lost and tell me how it was, and I’d read all of Brightest Day and tell him how it went. Almost a year later, and Generation Lost is perhaps my favorite book on the market. Now that we are nearing the end of this long voyage, does the story still hold up?

It isn’t often, we see a quiet moment of reflection in superhero comics for the most part, we want… and some need, action beats to keep their interest going. This issue doesn’t really feature any type of action, there’s a fight that lasts all of a panel and that’s about it. The rest of the issue deals with the team’s emotions after the death of the Blue Beetle at the hands of Max Lord. And after going on this journey with these characters for the last 10 months, I have to say it was truly rewarding to see how they’ve grown and developed as individuals and as a team. You get a range of emotions here from anger to depression to denial and even romance blooms.

At the heart of the issue, much like most of the series, lies Booster Gold. His section at the beginning of the comic with Blue Beetle’s body reminded me much of Captain America/Iron Man from Civil War Confessions. 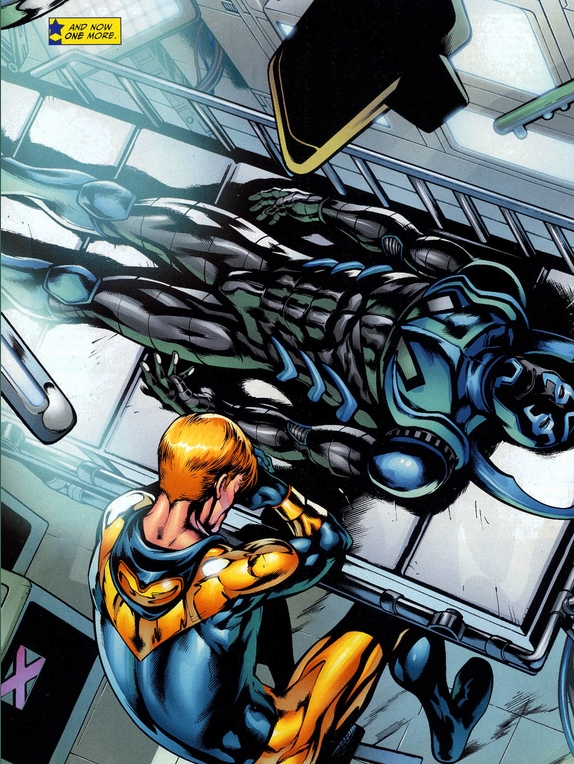 The one thing I will note about the image above, and the issue as a whole, the Blue Beetle costume just seems huge. Much larger than it was shown in previous issues, and I realize it changes from artist to artist, but it just looks monstrous for some reason, and that distracted me. 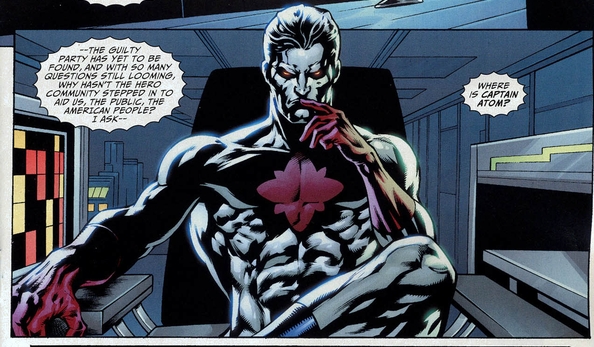 My second favorite panel from the issue is posted above. This is Captain Atom listening to the news reports aboutÂ causalitiesÂ from their recent battle with Max Lord. Again, it isn’t often we see heroes reflecting on the damage they cause when they battle for good. And this is carried more by his exchange with Ice in the next few pages, which leads to the single panel fight I mentioned before.

Recommendation: All in all, I love Generation Lost so whether you are reading it as it happens or trade waiting, I highly recommend the series. There’s really not much more to be said. The art is pretty solid, though as I mentioned I did have one minor problem with this issue. The writing is solid and the characters are just a thrill to be with every other week. I can’t wait to see how the end game plays out.

I realize that this series suffers from pretty much the same problems that Brightest Day does. It is a series that is deeply rooted in a prior series, which goes back further and further. The reason this gets a higher score is I feel it reallyÂ separatesÂ itself fromÂ BrightestÂ Day and Blackest Night, while you need to know that Max Lord comes back to life in Blackest Night, you really don’t need to know much else to read this series. Its marked down for being the 21st issue so there will be some confusion.

But if you want to pick up the trade for this series when its released, I feel it does a better job of standing on its own then Brightest Day has so far.