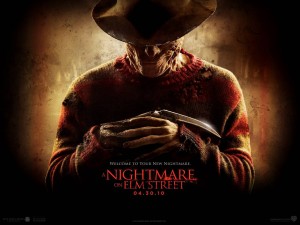 Isn’t it just the worst when a movie franchise known for its longevity and creativity ends with an absolute clunker? A Good Day to Die Hard and Rocky V are good examples of terrible sequels that seriously mar otherwise enjoyable series, but neither of those are as poorly conceived as the 2010 remake of A Nightmare on Elm Street. I have really enjoyed revisiting this classic series, and it’s a shame to end the retrospective on such a negative note.

Produced by Michael Bay and Platinum Dunes (who previously made the Texas Chainsaw Massacre and Friday the 13th remakes), 2010’s version of NoES initially seemed like a good idea. While New Nightmare ended the NoES series “proper” on a relatively high note, Freddy vs. Jason’s depiction of Freddy Krueger was stale and bland – a far cry from the manic fiend that gleefully terrorized teenagers in their dreams. Perhaps taking things back to the start was exactly what the series needed.

First of all, I have to address the elephant in the room that is the recasting of Freddy Krueger. Robert Englund did a phenomenal job of playing the demonic dream killer for nearly 20 years, but his portrayal ceased being scary at all fairly early on in the series. The remake makes the commendable choice of aiming for a much darker tone with a legitimately frightening villain. Jackie Earle Haley (who brilliantly portrayed the mentally unstable vigilante Rorschach in Watchmen) provides a sinister presence and gravelly voice as the new Freddy, but he is given virtually nothing to work with. For what it’s worth, I do think that Haley’s version of Freddy is by far the most visually disturbing.

2010’s NoES pairs the darker Freddy Krueger with a fittingly bleak plot that focuses on the child molestation atrocities committed by Freddy while he was human. I’ll give the film credit for not beating around the bush in regards to Freddy’s perverse proclivities, but the subject is handled with little tact, making the whole angle feel somewhat exploitative. The rest of the plot is a fairly barebones retelling of the 1984 film’s story, focusing on protagonist Nancy’s efforts to keep herself and her friends from falling asleep and being killed by Freddy in their dreams.

In their attempt to make a gritty, realistic Nightmare remake, the filmmakers must have completely forgotten that the main appeal of the series is arguably its creatively surreal nightmare sequences. Shockingly, there is not a single imaginative dream sequence in the entire film. The pitch-black tone would have allowed for plenty of deranged dream imagery and the opportunity for some truly scary cat-and-mouse scenes between Freddy and his victims, but the potential is completely neglected.

We get yet another callback to Tina’s brutal death sequence from the original NoES, surrounded by a handful of completely uninspired slashing deaths. In lieu of elaborate dream sequences, the film focuses on realistic violence, and while there is plenty of gore, it almost always feels trashy and unnecessary. I tend to bemoan the reliance of CGI in modern horror films, but it would have been great to at least see an attempt at a recreation of the infamous blood-vomiting bed from the original film.

What ultimately causes this remake’s failure is its creators’ desire to have it both ways, establishing a dark and gritty foundation while also trying to be hip and provide plenty of gross-out violence. There are some interesting ideas presented, such as the possibility that Freddy wants revenge after being falsely accused of his crimes, but they are abandoned in favor of lazy, blunt storytelling. While the film was financially successful, the fact that producers have been dragging their feet with a sequel shows that everyone involved realizes how off the mark this remake was.

Best Kill: Kris gets the gravity-defying “Tina treatment,” getting slashed along the bedroom walls.

Genuine Scares: Haley is legitimately creepy as Freddy. It’s a shame he isn’t given anything interesting to do.