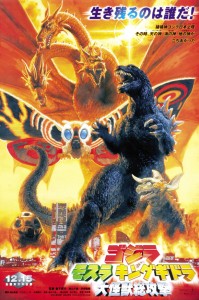 Interest in the Godzilla series was rapidly declining after Godzilla 2000 and Godzilla vs. Megaguirus were met with middling reactions by both fans and critics. Fearing another commercial disappointment, Toho once again proved that they can deliver the goods with their backs against the wall, hiring famed kaiju film director Shusuku Kaneko to helm 2001’s Godzilla, Mothra and King Ghidorah: Giant Monsters All-Out Attack (commonly referred to as GMK) – a film that is as awesome as its title is unwieldy.

GMK takes the best qualities of the previous Millennium-series films (a self-contained story, stripped-down narrative) while ditching or refining the lesser aspects (shoddy, prominent CGI; derivative “new” kaiju), making the film feel both fresh and familiar to longtime fans. The film opens in present day Japan, nearly 50 years after Godzilla’s first attack was repelled, and the world has started to become complacent. Reports of monster sightings have begun to circulate once again, however, and the Japanese Self-Defense Force (JSDF), headed by Taizo Tachibana, prepares for the worst.

While the JSDF investigates the possible reemergence of Godzilla, Taizo’s daughter Yuri, who makes schlocky documentary films, does some investigating of her own. Yuri interviews a man who claims to have seen a giant monster that may or may not be Godzilla burrowing underground. While researching an ancient Japanese prophecy concerning the three guardian monsters of Japan, Yuri meets a mysterious old man who tells her that the trio of beasts (Baragon, Mothra, and King Ghidorah) are the country’s only hope against Godzilla, who is possessed and enraged by thousands of vengeful spirits. 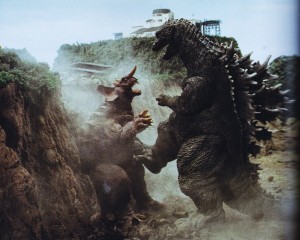 From this point forward, the film is non-stop fun, as each monster makes a memorably grand entrance before its inevitable encounter with Godzilla. Given the cinematic history of Godzilla’s foes (King Ghidorah alone often required multiple monsters to take down) you might think the odds are unfairly stacked against him. You would be wrong. GMK introduces a completely revamped Godzilla design that is equal parts menacing and nostalgia-inducing. Godzilla’s hulking form, threatening posture, and cold, cloudy eyes make him look absolutely nightmarish at times as he ravages Japan, going out of his way to kill as many innocent civilians as possible. This is the only time in the series that Godzilla is portrayed as a purely malevolent creature, and it works surprisingly well. Heck, even Godzilla’s prominent pot belly is intimidating!

The other monsters receive redesigns as well. Baragon – a monster absent since 1968’s Destroy All Monsters – looks like a dopey and lovable mole-dog, but he’s really just there as fodder for Godzilla to show off his abilities against. Mothra’s “bird talons” are fortunately toned down when compared to her appearance in Mothra vs. Godzilla, and she is impressive to behold, whether as an animatronic puppet or fully computer generated. King Ghidorah sadly suffers a bit in his redesign, being made smaller than Godzilla for the first time, and with significantly shorter necks. He’s still a good-looking kaiju, just not the imposing beast who was once Godzilla’s most fearsome rival. Thankfully, all nitpicking is quickly forgotten when the monsters start throwing down like professional wrestlers.

While the monsters do their thing (and they do it quite well), the humans do their usual scrambling about, only this time their contributions feel a bit more organic to the plot. Understanding the futility in simply barraging Godzilla with missiles, Taizo wisely waits for the guardian monsters to injure him before making a move, which proves to be pivotal in the climactic sequence. Yuri’s plot thread is handled a little more questionably, with her behaving like a brat while stubbornly insisting on filming the monsters. Her character is salvaged by her relationship with Taizo, but an embarrassing bit of “deus ex machina” (or should I say “deus ex rock-ina”..?) in the final act threatens to diminish some of the audience’s goodwill. 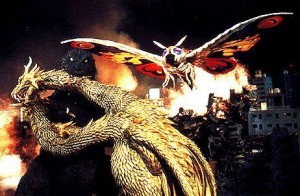 GMK is a fantastic Godzilla film, but not a perfect one. Some of the human characters’ exaggerated reaction shots will undoubtedly remind fans of 1998’s ill-fated Godzilla, and the aforementioned plot contrivances towards the end of the film loosen its otherwise firm hold on the viewer. There is some CGI throughout the film, but it is used sparingly – even elegantly at times – and is nowhere near as distracting as in the previous two films. The English language version is also disappointingly sub-par, with some truly bizarre mistranslations (such as the humans cheering when Ghidorah is accidentally hit with a missile) that mar both the dubbed and subtitled versions.

Director Kaneko earned his status as a kaiju prodigy by resuscitating the long-dormant Gamera franchise with a trilogy of excellent films in the 90’s that rivaled the best of Godzilla’s own Heisei-era adventures in terms of quality. The energy and creativity that Kaneko brings to GMK is undeniable, and he approaches the film with the sort of wide-eyed, child-like wonderment that can only come from someone who deeply admired the series as a child. Kaneko uses a keen eye to oversee the monster effects and utilizes some creative visual tricks to help create many eye-pleasing sequences.

In certain respects, GMK is the best Godzilla film ever made. It doesn’t have the deep social commentary of Gojira or the emotional intensity of Godzilla vs. Destoroyah, but it is ridiculously entertaining and clearly lovingly crafted by a genuine kaiju fanatic. It is respectful of the series’ legacy while cleverly altering the formula with an infusion of supernatural/mythological elements and a gleefully mean-spirited Godzilla. If you have somehow never seen a Godzilla film before, this is an excellent one to start with.

Fun Fact: Roland Emmerich’s “Godzilla” is referenced when the JSDF theorizes that a creature that attacked New York City in 1998 could have been mistaken for Godzilla.

Memorable Moment: Mothra meting out vigilante justice on a group of punks who are vandalizing a shrine