The premiere of Justice League Action in the States isn’t until December 16th, but thanks to one of our kind friends over in the UK, we are able to present you a review of the first aired episode over there. We’re not quite sure if this is the first overall episode so will re-cover that when the premiere occurs on Dec 16th. 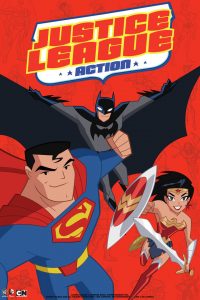 Justice League Action lives up to its title from the get go as we join a scene already in progress with Superman arriving at a prison to contain the Parasite. He is soon joined by Wonder Woman, and they make quick work of Parasite, but while putting him away an “asteroid” strikes their area seemingly killing the Parasite.

The asteroid however turns out to be Kalathoth, a Djinn, that was targeting the Parasite to steal his ability to absorb energy/power from others so during his battle with Wonder Woman and Superman, he grows stronger and more fierce. The duo decide to call in some back-up and their reinforcement leads to the episode’s big twist. If you know the characters, it will come as no surprise when you see the villain and the back-up what the plan is, but still fun to see it unfold.

Though, as we’ve learned recently, knowing the characters doesn’t mean you will know how the characters are portrayed in different mediums. As Power Outage serves as the first time we see this version of the Justice League in action (pun!), we do have to come to grips with the new or classic take on characters. For the most part, all of the characters are how you would expect except for Martian Manhunter, who is given a character quirk of working on his human humor. Maybe it’s just an one-off gag, but it was weird and interesting seeing him bounce a joke off of Batman.

Speaking of Batman, Kevin Conroy, who’s voiced the character longer than any other actor, reprises the role, and while it’s always a joy to hear him, part of us wished they had found someone else to get a brand new take on the character. Aside from Kevin though, everyone else has a new voice actor. Superman and Wonder Woman’s talent does a great job. Jimmy had a really fun presence in the episode, and while Manhunter’s voice was different from the deeper takes featured in Justice League/Young Justice, it does better fit his design and personality in this series. 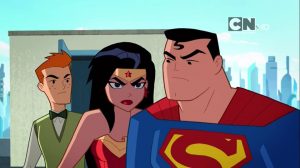 Voice-acting and character-design is all good and well, but the show is Justice League ACTION, and it lives up to that final part in spades. Each episode feels like you are joining the show just at the start of its climax, and kind of fills you in on the backstory as the episode goes on. The action is fluid, frantic and super-powered. From Parasite’s quick and agile movement to Superman being able to unleash the full breadth of his powers in 11 minutes, you get a ton of impact from the first scene. It only gets better as Wonder Woman enters the picture with her Amazonian spirit.

Justice League Action comes out of the gate strong, and the other half of the premiere proved to be just as entertaining. Based on the early episodes, the show seems like an easy recommend to check out.