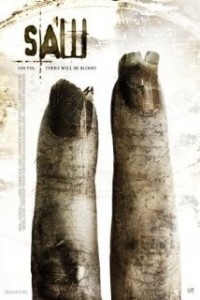 After the surprise success of Saw, producers scrambled to begin work on a sequel so that it could be released the following October. With series creators James Wan and Leigh Wannell busy working on other projects, directorial reins were given to young filmmaker Darren Lynn Bousman, whose unrelated script for a passed-on thriller was rewritten as Saw II. So how do you improve upon a unique little thriller like the original Saw? You add 100% more Donnie Wahlberg, of course!

Wahlberg stars as Eric Matthews, a deadbeat dad and crooked (yet well-meaning) detective. When Matthews finds his informant dead with an iron maiden wrapped around his head, he finds himself pursuing the infamous serial killer, Jigsaw. Matthews tracks the madman down to an abandoned factory, which he raids alongside a fairly incompetent SWAT team and apprehends Jigsaw, who is revealed to be a frail old man dying of cancer.

It’s obvious that Jigsaw planned on being caught, and he uses the opportunity to draw Detective Matthews’ attention to a number of monitors with security camera footage showing a group of eight seemingly unrelated people locked in a trap-filled house. Matthews is shocked to spot his teenage son Daniel among Jigsaw’s prisoners, and is forced to play mind games with the arrogant villain in order to learn the location of the house. As Matthews is forced to watch the trapped victims die horrifically one-by-one as they play their own series of twisted “games,” he slowly comes to realize the connection between his past and the identities of Jigsaw’s prisoners. 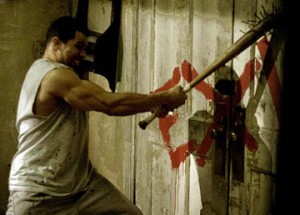 Saw II is a definite step down from its predecessor, and at times even has a bit of a “made for TV” procedural crime drama feel to it. While the acting in the original movie could be laughably over the top, Danny Glover’s overacting is infinitely more compelling than watching “Middle Daughter” from Seventh Heaven arguing with “Terrible Wannabe Dance Choreographer” from Showgirls. The supporting cast in Saw II is so utterly obnoxious that you really start rooting for them to die, but I guess that’s par for the course for the horror genre.

Although ultimately disappointing, there’s still plenty for gorehounds to like about Saw II. Jigsaw’s deadly traps, while lacking in creativity, are more psychologically horrific than what is typically found in a Saw movie, with more focus on common phobias such as needles and razors. Bousman does a decent enough job of emulating Wan’s directorial flourishes, though I wish he would have restrained with the hyper-editing a bit. The now-traditional “twist montage” during the film’s climax makes up for a lot with its high camp value, and leads well into the third chapter.

Best Death: A woman reaches up into a glass and metal box to grab a syringe filled with an antidote for a deadly disease. The box has two holes just big enough for her arms, but razor blades prevent her from pulling her arms back out. Her presumed death is not shown on-screen, but her predicament is haunting nonetheless.

Genuinely Scary Moment: Watching a woman get dropped into a pit full of dirty hypodermic needles is downright terrifying.

Review: 3 (out of 7) Saw II brings a handful of new ideas to the table but is one of the more annoying entries in the series. 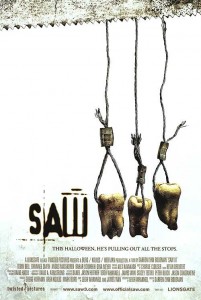 Saw III continues where part two left off, with Detective Matthews shackled to a wall by the ankle, being held prisoner in the very bathroom that the original Saw took place in. We now know that Jigsaw’s real identity is a terminally ill old man named John Kramer, and that he has a young protégé named Amanda who helps him to set up his “games.” As Matthews’ fellow detectives work to discover his location, they must also investigate the bloody aftermaths of Jigsaw’s sadistic traps, which are becoming increasingly difficult – if not impossible – to survive.

With law enforcement effectively distracted, Jigsaw and Amanda focus on their pet project: a series of morality tests for a man named Jeff, who is obsessed with getting revenge on the man who killed his child in a hit-and-run accident. Jeff is abducted and placed in an abandoned meatpacking facility where he encounters imprisoned people with connections to his son’s death and the subsequent trial. Each room of the facility contains a trial for Jeff where he is given the choice to rescue the prisoner or let them suffer a gruesome demise. 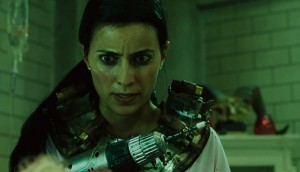 Saw III lets you know very early on that it really wants to gross you out. Not 15 minutes in the film, viewers are subjected to a man smashing his own foot into a pulp and another man tearing chunks of his own flesh off with hooks. There is a ridiculously prolonged (and admittedly impressive) brain surgery sequence halfway through, but that’s nothing compared to watching a man drown in the liquefied remains of rotten pig corpses. The Saw series has never been for the squeamish, but this entry will test the mettle of even the most die-hard horror fans.

The violence is a bit on the trashy side and the narrative is oddly-paced and convoluted, and yet… Saw III is highly watchable. The film juggles heavy-handed moral complexities and gruesome violence with a sense of audacity that is surprisingly commendable. It obviously won’t win over those who couldn’t get through the prior movies, but it holds its own and is one of the best in the series.

Best Death: Not only does the aforementioned “hook & chain” guy tear through his flesh and ligaments in an effort to free himself, but he is blown to pieces by a dirty bomb for failing to break the final chain in time.

Genuinely Scary Moment: Let’s not even pretend that drowning in pig intestines isn’t pretty much the worst thing ever.

Review: 4 (out of 7): Saw III is more or less a return to form, showing that there are plenty of sick ideas left for the series.