To many the Twilight Saga was a 5 film, multiple year ordeal. To us, it was two movies and a couple of months. While watching the first and last movie doesn’t make us experts on the franchise, we’re going to review it anyhow! 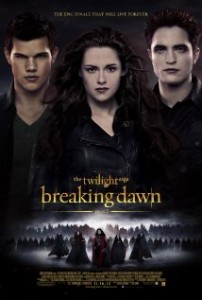 I had fun with this one, despite being horribly lost as to what the “plot” was about. The main villain, played by Michael Sheen, was just delightful and the ending battle was one of the best/worst finales to a film ever. Obviously this movie had a lot of problems eg, half of te human characaters being CG’d and the acting was nonexistant. But if you are looking for a fun bad movie, watch this one. LIke, now, go now to watch it.

This is such a hard movie to review. Much like the first film, I felt the plot lacking. For the most part, there isn’t much going on for the early half of the film. The good guys and bad guys are building an army, but no side ever makes their point entirely clear. Their problem could have been simply resolved itself by communicating.

On the other hand, it seems to enjoy it’s terribleness to such great degree that you can’t help and feel entertained by certain aspects. Then the climax happens, it is some of the most hilarious but fun action I’ve seen in a film.. and then the movie takes it all away from me! It left me bitter, but I think the climax before that point is worth checking out.

There’s also some cringe-worthy moments like the CG baby/child and the one scene where Jacob does aÂ stripteaseÂ for Bella’s father. Oh and their sex shack.Â

This was not one of our best films for drinking. Our rules did get applied but not as much as I would have liked. Drinking from deaths was probably the number one with the main characters names being a close second. If you do choose to watch this one I suggest just drinking every minute.

The drinking is this movie was highly slanted towards the climax of the film with the amount of decapitation on display hitting absurd highs. During the early portion of the film though, name dropping was fairly popular, and I think bonus drinks should be taken for anytime someone says the child’s name which is so out there, but taken so seriously by the characters. Oddly or sadly or somethingly, there isn’t much sparkling vampires on display in this film.Â

The first 3 rules, the stare, the hair and the lip-biting didn’t get much use in this film either. Not sure what to replace it with though. Perhaps drink for each member recruited to either team!Â

Twilight Breaking Dawn Part 2 isn’t a bad movie. It isn’t a great movie either, but it is an entertaining movie. I don’t think it was deserving of the Razzie, but wouldn’t recommend it to anyone based on our drinking rules.