Enter at your peril,
Past the vaulted door
Impossible things will happen
That the World’s never seen before.
In Dexter’s LaboratoryÂ
Lives the smartest boy you’ve ever seen
But Dee Dee blows his experiments
To Smithereens!
There’s Gloom and DoomÂ
When Things go BoomÂ
In Dexter’s Lab

Dexter’s Laboratory was my jam when I was a wee little lad, but even I was taken aback a bit by the announcement of the continuation of the franchise over a decade later in comic format. After their initial comic debut though, I feel like Dexter and DeeDee may have been better served in retirement.

The issue isn’t bad. Far from it, but it is completely uneventful. This issue feels like the start of your typical Dexter’s Laboratory episode. Dexter has his latest and greatest invention that would change the world, in this case a device that would allow him to access more of his brain power, but just when he is about to begin Dee Dee comes in and ruins it for him. It’s a fun little trope of the series, but it usually leads to something more substantial, and we do get a hint of what the future may hold in this comic, but it’s not enough meat in this book to warrant a read on it’s own.

It also kind of highlights one of the glaring flaws of the Dexter’s Laboratory set-up. Dexter has an entire room dedicated to his failed experiments (with the cutest password Dee 9’d), and it just made me think, why doesn’t he return to any of these experiments instead of completely writing them off due to one mishap with his sister? But that has nothing to do with the comic, more to do with the general theme of the series.

What I will give much kudos to is the art in the book. It handles the style of the show with ease. It can’t be easy trying to mimic a style while still making it your own, but Ryan Jampole seems to have a knack for it (check out his work in Sonic and Mega Man for more confirmation on that). It is also a book that is just a joy on the eyes. I’m a man who loves big, bright colors and this book just oozes it. Infusing the characters with a life with the little comical flourishes. Like splitting up Dexter’s monologues with some of his own internal dialog which does make it look like he speaks to himself less even if he still totally does. 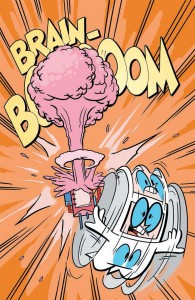 Review 4 (Out of 7) – There is nothing wrong with this book at all, but the story just doesn’t seem to be there yet. I know it’s setting up an arc or a storyline, but could have done more in this issue to make it interesting. I would recommend checking it out for the art though!

P.S: One of the variant covers features the Powerpuff Girls, which was just cruel since they aren’t even in the comic!