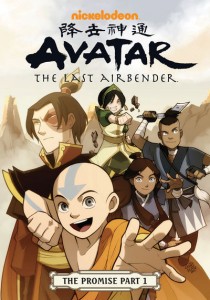 Avatar: The Last Airbender is perhaps one of the greatest animated series of all time, definitely one of the best in the past decade. After 3 seasons on the air, the show ended with a rich legacy filled with interesting characters, locations and personal voyages. While the show wrapped up almost all the major plot points, there were some lingering questions left for fans.

Avatar: The Last Airbender looks to continue the legacy of the show picking up shortly after the conclusion of the show. Does The Promise build upon a solid foundation or shall it be left in the trash much like the live action adaption?

The comic starts off with an introduction that fans of the show shall be all too familiar with, recapping the premise of the show as well as highlight Aang’s defeat of the Fire Lord. The story picks up after the conclusion of the show (we aren’t told how long exactly, but it does seem fairly close after the end of the show) with the new Fire Lord Zuko in a meeting with Aang, Katara, Sokka and Toph. During this meeting, Zuko decides it is for the best of the world to remove Fire Nation colonies from the other tribes homes. This plan, the Harmony Restoration Movement, as Sokka dubs it, forms the crux of the backbone for this story.

After the group decides on a plan of action, we get some nice character moments. We briefly visit Uncle’s tea shop, and we see Aang and Katara make-out while Sokka doesn’t react as kindly to it. Most importantly though, we have a scene between Fire Lord Zuko and Avatar Aang in which Zuko forces Aang to promise him that he would kill him if he ever turns into his father. Hence the “promise” in the title of the book.

The book then jumps forward a year as Zuko is settling into his role as Fire Lord, but not comfortably. Since the start of his reign, he has had 5 assassination attempts on his life and during the course of the night, another one is tried. Though, he is able to fend off his assailant we learn that not everyone is happy with the Harmony Restoration Movement. We cut to the next day and Zuko is visiting the Fire Nation colony in the Earth city of Yu Dao.

Zuko confronts his would-be assassin’s family, and realize that not everything is going alright with the Harmony Restoration Movement. While newer Fire Nation colonies are easily uprooted, those who have had their entire lives in these colonies for generations feel like they are getting the shaft. Along the way, the father compares Zuko to his father which sets his off a bit.

We get a flashback to one of the final scenes of the animated series where Zuko confronts his father about the whereabouts of his mother. We are finally given a more fleshed out version of their conversation, and while we don’t learn about his mother, we do get to see more about the burden that rests on Zuko’s shoulders.

The story then cuts to Aang relocating several Fire Nation citizens back from outlaying colonies, and showing them how things have changed under Zuko. When they finally reach the Fire Nation, they are alerted to the fact that the Harmony Restoration Movement has been called off. Aang and his friends then leave off in search of Zuko, and I shall leave it there because this is a review and not a recap.

I will say that overall I enjoyed the story while it feels a little slow in places, it has to pace itself properly to not just throw everything at the wall at once. There is a lot of ground to cover in this first trade and they do a decent job with the material at hand.

I was most impressed with the focus on Zuko, he was always one of the more dynamic characters on the show since he had such depth to him. It only makes sense that becoming Fire Lord doesn’t suddenly lift this giant weight he has placed on himself. He is still very much an insecure outsider in his own head. He has some interesting scenes in the book including his first confrontation with his assassin and later on when he deals with Katara and Aang. Though, his biggest moments comes from his conversations with his father. I mentioned the one earlier that takes place during the end of the show, but there is one later on in the story that leads to many interesting questions for the second volume.

The rest of the cast are given moments, but none are handled as strongly as Zuko except for Aang’s moment with his former mentor, Avatar Roku. As mentioned earlier, Aang had promised Zuko that if he ever started to become his father that he would kill him. Any fan of the show would know how strongly Aang feels about murder, he even spared the Fire Lord after all the hideous things he did. So when he hears of Zuko’s denouncement of the Harmony Restoration Movement, he realizes that he may have to keep his promise yet. Roku shares that he regrets not killing Fire Lord Ozai when he saw what he was becoming even though they were great friends.

Much like the show, the comics’ core strength comes from the characters. That isn’t to say the action isn’t great, but it is only used in the rarest of situations. There are maybe two major fight scenes in this book, and they are both effective because they highlight an emotional response from the character(s) involved in them. They don’t go on too long or don’t take up too many pages to become tedious or a chore, but they advance the plot just the same. 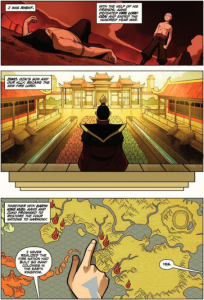 All of the fantastic character moments and action are bought together by the rock solid art in the book. The comic uses the same style and colors as the animated series, and it really does shine on the pages. I particularly like the lighting and shadows used during Zuko and Ozai’s conversations. If I had one beef with the art, its sometimes they skimp on details if a character isn’t in the foreground. But it is a minor issue to be sure.

Now for the million dollar question, is this book worth a read if you are a fan of the series? And that is a tough question to answer. While I’ve highlighted all the fun moments in the book including strong character moments and fight sequences, there is still a sense of slow momentum in this book. While a lot of ground is cover, a lot of it remains unchanged or unsaid. There are still many questions left unanswered and even more added to those questions. Will they be answered in the next trade or by the time this whole ordeal wraps up? There’s really no way to tell for sure. But what are between these pages is highly enjoyable and really worth a read on its own.

If you are a fan of the animated series, you owe it to yourself to check out this book. And if you aren’t a fan of the series, I honestly don’t know what’s wrong with you!

New Reader Accessibility: 3 This is a tough one. I mean this book reads fine on its own, but it does build on a 3 season long television series, and having seen that would help understand the book a whole lot more.