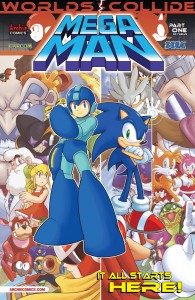 When it comes to video game crossovers, Sonic the Hedgehog and Megaman wouldn’t be two franchises I had in mind. I also wouldn’t expect the crossover of two of gaming’s biggest icons to take place in the pages of comics, and not an actual video game.

Let here we are with the first issue of “When Worlds Collide”, Â 12-issue maxi-series that sees the world of Sonic the Hedgehog and Megaman collide due to the actions of Dr. Robotnik and Dr. Wily.

After reading Megaman 24, I have to say I was pleasantly surprised. It wasn’t a crossover that anyone asked for, and in theory it didn’t make any sense based on their games, but painting in broad strokes both franchises have a lot in common. They both star heroes decked out in blue. They are both surrounded by a decent size supporting cast of heroes and villains. They both have evil scientists as their main enemies, and they are both a bit cheesy, but fun.

The issue took a brave stance by starting us in the action with Sonic and Megaman doing battle. Neither hero really having the advantage over the other. As the fight continues, we see that Dr. Wily and Dr. Robotnik celebrating their victory.. knowing comics their premature victory.

We are then set back to understand how these events came to be, and the rest of the issue is spent detailing Robotnik and Wily’s first encounter and then slowly building up their plot. There is a surprising lack of Sonic and Megaman beyond their initial fight.

It works though. The writer has a lot of fun with the Wily and Robotnik dynamic and it just comes off as charming. It’s weird because you really can’t root for them, but they aren’t painted as these vicious, ruthless monsters either. It’s an art that is sometimes forgotten, but you can make your villains somewhat likable, which makes it easier to hate them when they eventually do something dastardly.

And we do get something major in that regards and its our big cliffhanger ending!

Having your two main players be dressed in an extremely vibrant color and living in bright and sunny worlds really does help with a comic book. The art in this book is top-notch. The characters are extremely detailed (and different), the pages just ooze with color and life.

If I had one complaint about the art is sometimes it makes the action seem a bit stiff. Granted Megaman is a robot and speed is always tough to pull off in comics, but it doesn’t seem lively at times. It is a minor complaint and curious to see what happens when we spend more time with Sonic and Megaman.

Score 6 (out of 7)– I went in not expecting a ton, but was pleasantly surprised by what I got. I shall be checking out the rest of the series as it releases!