The greatest thing about living in the “City that never sleeps” is you always find something new and interesting to do. This past week, I was introduced to NYC Games Forum Playtest Night, which seems to be a place where the New York City game development community comes together to showcase the latest build of their games, get feedback and impressions from their fans and peers and hopefully create some positive buzz for this slice of the world.

With more than 40 games on display, there really isn’t enough time to try them all and come away with a ton of meaningful impressions. So instead of breaking down all the games I did see, and offer thoughts. I’ll just highlight some observations, and my personal highlights from my hands-on time.

First, I think the idea is great. I will be honest, I don’t often go out of my way to track down indie games, there’s enough retail titles as it were, but this event is like a giant fair putting out all of these great games for you check out and play. Almost all of the developers are on hand, and friendly and engaging. Both while you’re playing and after to offer up some feedback. They all seem to take things in strides. And while it was my first outing, others have been there before and were really positive to see their feedback incorporated into the final build.

Second, and won’t single any properties out, but I’m kind of over just simple pixel art. I get why it is used often in indie games, but there were a lot of games that all just kind of blurred together in my head after the event because they looked similar. Not that they had the same characters or anything, but pixel art doesn’t really stand out anymore. It’s like trying to get me to name a war-FPS based off of screenshots. Granted, there were some shining examples of people using simple pixel art with a bit more touch-up to really stand out.

Now that the “boring” stuff is out of the way. We can go to the games! 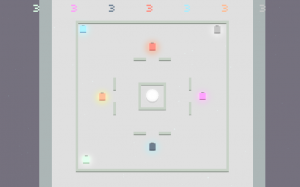 My favorite games was perhaps one of the most basic ones on display. Called Zarvot, it is a local multi-player game for 2-4 players. The simplest way to describe this game would be a stripped down version of “Tanks” from Wii Play. It’s a simple overhead arena shooter of sorts. You play as a cube that has the ability to fire rockets and create a shockwave. Scattered throughout the course, you’re also able to pick-up power-ups, which changes your default shot, and break through the environment which creates obstacles and paths of fire. It only features two main buttons, but I found it highly addictive. I think because the rounds were so short (maybe no more than a minute) and it was quick to get right back into the next. I spent a lot of time just trying it out. The game also offers different modes of play including an interesting twist on Capture the Flag called “Tug” in this mode you have to capture a central object, but you don’t grab and run instead you have to “tow” it along behind you. Which changes up your strategy a bit since you can’t go too fast or you’ll leave it behind and you can’t really cross paths with opponents because they can hook it away from you without killing you. It was a fun little diversion, though it could be better explained. According to the developer, the game is set to be released by the end of the year for PC and Wii U, and he anticipates it being on other consoles in 2015. 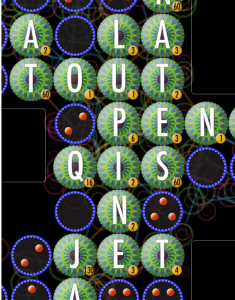 I’m a word game nerd, and sadly there aren’t a ton of new and interesting ones on the market. Enter QatQi Re, which is a sequel to QatQi (a mobile game). The best way to explain this is a mixture of Bananagram and a maze. You are giving free reign to create words on a space, but the board only opens up based on the direction and length of the word you are building. As you create these words, other letters will fall to you and using all of this you have to find your way to the end of the level. But the end of the level isn’t known to you from the get-go so it works as a maze as you try to navigate the space and when you hit dead-ends retreat until you find a new path to go down. I found this game to be really enjoyable. It has a nice, simple style that worked for it, and challenged you in a different way for most games. I would recommend picking up the original, if its half as good as its follow-up.

I hate to simplify any game to “it’s like X,” but one of the big themes at the show seemed to be that folks really dug Towerfall. The whole 2D platformer/traversal/combat game was on decent display this past week, and two of my favorite games fell into that genre. First was Skyhook, which is taking the grappling hook movement/usage from Bionic Commando and applying it to a 4-player free for all. It makes for a really fun and chaotic game. As your weapon is both for platforming (you use it to attach to platforms to get to different levels and areas) and offensively (the only way to defeat your opponent is to hit them with the tip of your grappling hook) so it makes for good strategy as you try to get the higher ground while also attacking your foes. If I had one complaint, there are certain stages that feature a hot air balloon, and that seems to break the balance of the game just a bit. But I can see their purpose.

The other game was “Demons with Shotguns” which is a local 2D, platformer,shoot-em up. The main difference with this game though is you don’t get points for killing your opponents, instead the first person who dies gives up their “soul” and a player needs to take the soul and leave it in a pit to score. It reminds me of the chaos of Halo’s Headhunter mode. It’s also offers some unique gameplay since only one soul is ever in play at a time. And once that is scored, it becomes a mad dash to become the first person to kill someone. Though at times, it may benefit you to wait in the shadows as well. It was a blast to play.

The final I want to give a special shout-out to is Lindie. A simple, but apparently amazing perplexing puzzle game for me. I’m sure I looked like an idiot trying to play this game, but what was there seemed to be the start of something fun and addicting. And really all I ever ask for in my mobile games. The game has a multitude of stages in which you need to connect boxes marked with “.” while avoiding any with an “x,” but the boxes expand out on the touch of your finger until they hit a wall (the concept I didn’t quite wrap my head around until after my demo), and it’s all about pre-planning your moves and getting to the end. I’m curious to go back for round two later on.

Those are the 5 games I wanted to highlight, but there was literally dozen more. If you want, can check out the full listing below, and I hope to check out the event again!